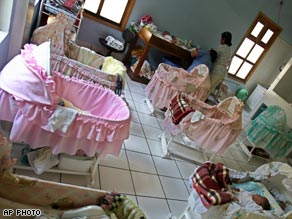 The Casa Quivira home has arranged for hundreds of Guatemalan babies to be adopted by U.S. parents.

Authorities have said the Casa Quivira adoption home, run by an American man and his Guatemalan wife, lacked the proper paperwork for the children, and they are investigating whether any of the children were abducted or coerced from their parents.

Pediatrician Ramiro Molina of the Guatemalan welfare agency said the children were improving and could be released within days. He said the problems stem from respiratory illnesses the children suffered before police raided the home August 11 and the agency started caring for them.

Casa Quivira owner Clifford Phillips of Florida and adoptive parents in the U.S. said in e-mails to The Associated Press that the government's caretakers failed to provide the babies with proper food, medical care and clean conditions.

"I am appalled by the abuse of the Guatemalan government to illegally occupy the private property of the Casa Quivira Children's Home," Phillips said.

He said authorities refused to allow Casa Quivira staff to bring specialized formulas and medicine into the home or let staff doctors examine and treat the children. He also accused the welfare agency of allowing the "basic hygienic status of the home to deteriorate."

The assistant director of the welfare agency, Sully de Ucles, said officials decided to hospitalize the children after problems cropped up in a court-ordered evaluation of their health.

The United States has pushed for a crackdown in an industry that has placed more than 25,000 Guatemalan children in U.S. homes since 1990 -- so many that every 100th baby born in Guatemala grows up as an adopted American.

Casa Quivira has arranged for hundreds of Guatemalan babies to be adopted by U.S. parents.

Phillips and his wife, Sandra Gonzalez, an attorney, say all of Casa Quivira's babies have been properly turned over to it for adoption since it opened in 1996