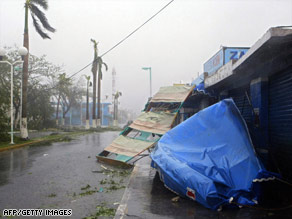 CHETUMAL, Mexico (CNN) -- Hurricane Dean made landfall on Mexico's Yucatan coast Tuesday morning as a monster Category 5 storm -- capable of inflicting catastrophic damage -- but the storm rapidly lost strength as it traversed the peninsula and was downgraded to a Category 3.

Debris is scattered in Kingston, Jamaica, on Monday after Hurricane Dean hit the area.

The leading edge of Dean's eye wall moved ashore with sustained winds of 165 mph (266 kph) about 4:30 a.m. Tuesday just north of Chetumal, the capital of the Mexican state of Quintana Roo, according to the National Hurricane Center.

The storm is expected to lose more strength as it passes across the Yucatan, before re-emerging in the Gulf of Mexico. It is forecast to strengthen again and hit central Mexico Wednesday with winds around 100 mph (161 kph).