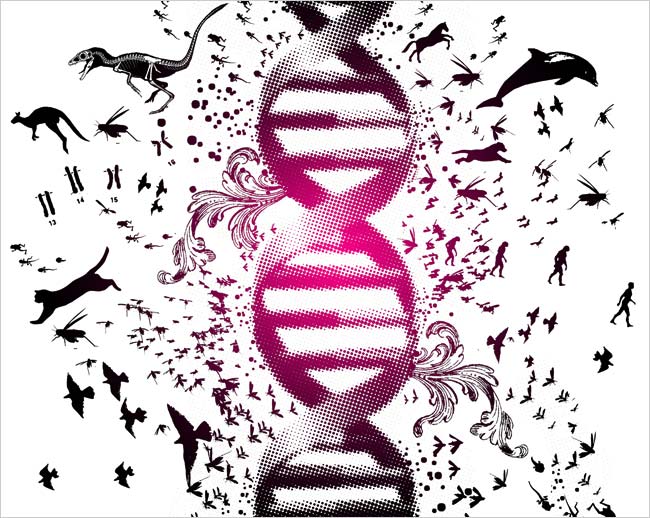 Since its humble beginnings as a single cell, life has evolved into a spectacular array of shapes and sizes, from tiny fleas to towering Tyrannosaurus rex, from slow-soaring vultures to fast-swimming swordfish, and from modest ferns to alluring orchids. But just how such diversity of form could arise out of evolution's mess of random genetic mutations - how a functional wing could sprout where none had grown before, or how flowers could blossom in what had been a flowerless world - has remained one of the most fascinating and intractable questions in evolutionary biology.

Now finally, after more than a century of puzzling, scientists are finding answers coming fast and furious and from a surprising quarter, the field known as evo-devo. Just coming into its own as a science, evo-devo is the combined study of evolution and development, the process by which a nubbin of a fertilized egg transforms into a full-fledged adult. And what these scientists are finding is that development, a process that has for more than half a century been largely ignored in the study of evolution, appears to have been one of the major forces shaping the history of life on earth.

For starters, evo-devo researchers are finding that the evolution of complex new forms, rather than requiring many new mutations or many new genes as had long been thought, can instead be accomplished by a much simpler process requiring no more than tweaks to already existing genes and developmental plans. Stranger still, researchers are finding that the genes that can be tweaked to create new shapes and body parts are surprisingly few. The same DNA sequences are turning out to be the spark inciting one evolutionary flowering after another. "Do these discoveries blow people's minds? Yes," said Dr. Sean B. Carroll, biologist at the Howard Hughes Medical Institute at the University of Wisconsin, Madison. "The first response is ‘Huh?' and the second response is ‘Far out.' "

"This is the illumination of the utterly dark," Dr. Carroll added.

The development of an organism - how one end gets designated as the head or the tail, how feet are enticed to grow at the end of a leg rather than at the wrist - is controlled by a hierarchy of genes, with master genes at the top controlling a next tier of genes, controlling a next and so on. But the real interest for evolutionary biologists is that these hierarchies not only favor the evolution of certain forms but also disallow the growth of others, determining what can and cannot arise not only in the course of the growth of an embryo, but also over the history of life itself.

"It's been said that classical evolutionary theory looks at survival of the fittest," said Dr. Scott F. Gilbert, a developmental biologist at Swarthmore College. By looking at what sorts of organisms are most likely or impossible to develop, he explained, "evo-devo looks at the arrival of the fittest."

Charles Darwin saw it first. He pointed out well over a century ago that developing forms of life would be central to the study of evolution. Little came of it initially, for a variety of reasons. Not least of these was the discovery that perturbing the process of development often resulted in a freak show starring horrors like bipedal goats and insects with legs growing out of their mouths, monstrosities that seemed to shed little light on the wonders of evolution.

But the advent of molecular biology reinvigorated the study of development in the 1980s, and evo-devo quickly got scientists' attention when early breakthroughs revealed that the same master genes were laying out fundamental body plans and parts across the animal kingdom. For example, researchers discovered that genes in the Pax6 family could switch on the development of eyes in animals as different as flies and people. More recent work has begun looking beyond the body's basic building blocks to reveal how changes in development have resulted in some of the world's most celebrated of evolutionary events.

In one of the most exciting of the new studies, a team of scientists led by Dr. Cliff Tabin, a developmental biologist at Harvard Medical School, investigated a classic example of evolution by natural selection, the evolution of Darwin's finches on the Galápagos Islands.

Like the other organisms that made it to the remote archipelago off the coast of Ecuador, Darwin's finches have flourished in their isolation, evolving into many and varied species. But, while the finches bear his name and while Darwin was indeed inspired to thoughts of evolution by animals on these islands, the finches left him flummoxed. Darwin did not realize for quite some time that these birds were all finches or even that they were related to one another.