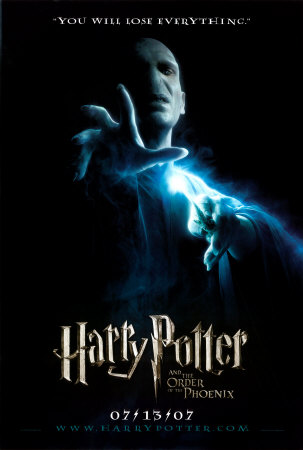 With Harry's fifth return to Hogwarts, so comes with it the realization that Voldemort's return to power is not the only factor that will contribute trouble to the times. As The Ministry insists on his and Dumbledore's obvious lunacy, Harry is forced to confide his trust within a different force, turning out to be just as dangerous. Written by Beetfields

After a lonely summer on Privet Drive, Harry returns to a Hogwarts full of ill-fortune. Few of students and parents believe him or Dumbledore that Voldemort is really back. The ministry had decided to step in by appointing a new Defence Against the Dark Arts teacher that proves to be the nastiest person Harry has ever encountered. Harry also can't help stealing glances with the beautiful Cho Chang. To top it off are dreams that Harry can't explain, and a mystery behind something Voldemort is searching for. With these many things Harry begins one of his toughest years at Hogwarts School of Witchcraft and Wizardry. Written by HPfan

After returning to Hogwarts to begin his fifth year at Hogwarts, Harry Potter discovers that much of the wizarding world, including the Ministry of Magic, is in denial about Lord Voldemort's return. The Order of the Phoenix, a group sworn against Voldemort, is using its vast array of wizards and witches magical abilities to combat Voldemort. Cornelius Fudge, Minister for Magic, suspects that Dumbledore is using these claims of The Dark Lord's return as a means to over-throw Fudge as Minister. In retaliation, a new Defence Against the Dark Arts teacher is appointed by the Ministry in order to keep an eye on Hogwarts. This new teacher, Professor Umbridge, implies strict new teachings and rules, forcing a group of students, under the tutelage of Harry, to form a club, by the name of Dumbledore's Army... Written by Loopy Bug

Harry Potter returns to Hogwarts for one of his most difficult years yet. Not only must he study for his OWL exams, but as the Ministry of Magic is gradually taking control of Hogwarts and spares no efforts trying to discredit him, he tries to tell the skeptical wizarding world the truth of Voldemort's return... Written by Jason Rivest

Trouble brews as Harry's fifth year at Hogwarts begins. The authorities are ignoring Harry and Dumbledore's warnings of Voldemort's return, causing his fellow classmates to view him with disdain. Meanwhile, a new witch assumes control at Hogwarts, throwing the entire school into chaos. Will Harry lose everything? Written by spydamang