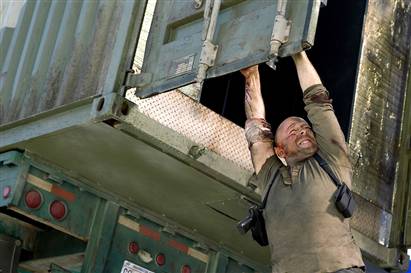 ") into big-screen success ("Blind Date," "Sunset"). Its villain was unknown this side of the Atlantic. One of its writers had done mostly TV ("Lucan," "Knight Rider

"), while the other had no credits to his name. Its source material was a novel, a sequel actually, about an aging detective named Joe Leland visiting his daughter and grandchildren in L.A. It was called "Nothing Lasts Forever" but the filmmakers decided to change the title to something punchier and punnier.

They called it "Die Hard."

Released in July 1988, it made more than $80 million and spawned an entire sub-genre of movies: "Die Hard" on a boat ("Under Siege"), "Die Hard" on a plane ("Passenger 57"), "Die Hard" on the president's plane ("Air Force One"). Basically: a group of bad guys take over a small enclosed space, and one good guy, who's there more or less by accident, tries to stop them.

P.S. He always does.

Shoeless Johnny
So what is it about that first "Die Hard" anyway? Why did it work? Why are we talking about a fourth "Die Hard" installment rather than, say, "The Principal IV" starring Jim Belushi?

For starters, the grandfather-detective named Joe Leland morphed into a father-cop named John McClane. Everyone can get behind a cop.

He's about as "regular guy" as you can get. He rides in the front of the limo. He checks out centerfolds while running for his life. He likes Roy Rogers. Hell, he's the kind of guy who would like "Die Hard." One wonders if that isn't a key to success: Would your lead character like the movie he's in? Then your audience will probably like him.

They gave him little vulnerabilities. He's tough, but afraid to fly. He smokes, but carries around a giant teddy bear for his kids. He's not bad-looking but has marital troubles.

Best of all: They take away his shoes. That's smart. When the shooting starts, he's still busy in the plush 30th-floor bathroom making "fists with his toes," as his airplane seat-mate suggested he do to overcome anxiety, and he doesn't get them back for the rest of the film. It's a small thing that adds up to a large thing. I remember cringing in the theater when he has to pluck glass shards from the bottom of his bloody feet.