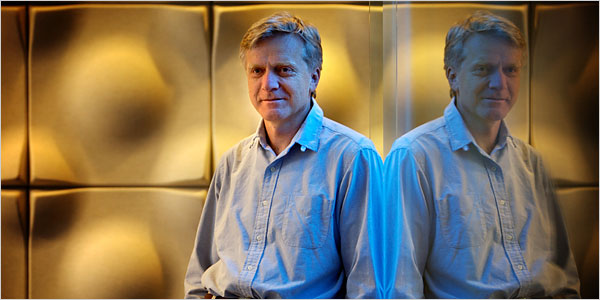 Billionaire Thinks in Trillions for His Computer Designs

Twenty-six years ago as a Stanford University graduate student and a co-founder of Sun Microsystems, Andreas Bechtolsheim designed a simple but powerful personal computer workstation that would help define the modern technology era.

Today, at a high-performance computing conference in Dresden, Germany, he plans to introduce his newest machine: a supercomputer to be named the Sun Constellation System that will compete for the title as the world's fastest when installation is complete this year.

"It is hard to believe that 30 years later I am still working on the same problem," said Mr. Bechtolsheim, who is better known as Andy.

Between the milestones, Mr. Bechtolsheim, who is 51 years old, has designed a parade of computers that have continued to squeeze the most processing power or storage capacity into the smallest possible space. And, despite becoming one of the richest people in the world, he remains obsessed with designing ever more powerful computers. His new machine, which is currently being installed at the Texas Advanced Computing Center in Austin, is the latest example of his trademark elegant and simple engineering. It is set apart from other supercomputers made from tens of thousands of networked microprocessor chips by Mr. Bechtolsheim's ability to orchestrate the range of computing disciplines that are needed to create the fastest computers.