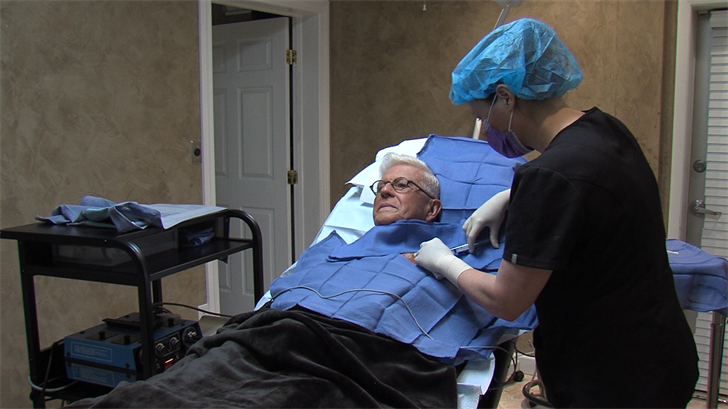 MANATEE COUNTY- If its caught early, melanoma can be cured in less than 15 minutes, when it’s ignored it can be one of the deadliest forms of cancer.

Bob Trisolini is an avid swimmer, who spends lots of time outdoors. He wears sunscreen regularly, but is always concerned about the risk of skin cancer.

“I try to swim every day half hour to 45 min,” Trisolini said. “and because I’m an outdoor person I go to my dermatologist at least 3 to 4 times a year.”

Between visits he checks his own skin. He checked himself last week.

“This time I saw something and it just looked a little different in shape,” Trisolini said. “So I went and we got a little biopsy right there.”

“Bob was diagnosed last week obviously with melanoma,” Dr. Robin Hamlin. “So we’re going to do a little office excision, it’s at the early stages so you don’t have to do a big excision.”

Trisolini caught his melanoma before it got a chance to spread.

“We send it to a pathologist and they look at it to confirm that we have adequate margins,” Dr. Hamlin said. “And as long as the margins come back normal then he’s cured.”

The whole procedure is outpatient with only local anesthesia, and took under 15 minutes.

“His is caught at about the earliest stage you can even catch it,” Dr. Hamlin said. “Which is what you want to do, that way it’s pretty minimal, minimal scarring and everything heels well.”

All possible because Trisolini is diligent about checking for skin cancer.

“In the United States,” Dr. Hamlin said. “About 10,000 people a year die from melanoma that’s undiagnosed or they don’t find out till it’s too late.”

Trisolini hopes his story encourages us to visit the dermatologist regularly.

“Check, check, check all the time,” Trisolini said. “Things that feel a little bit different than normal, or are a different color , or a different shape, go get it checked.”

“Annual screening and always watch for the signs of melanoma,” Dr. Hamlin said. “A lot of times they speak about the ABCD’s. If it has anything that asymmetrical around the borders, the borders changing, and not being real regular like common moles. Color, if there is an irregular color, and differences from the normal of what you’ve had your whole life. Diameter, if it’s growing abnormal and something that hasn’t been the same for a long time and constantly changing are the things you want to watch for.”