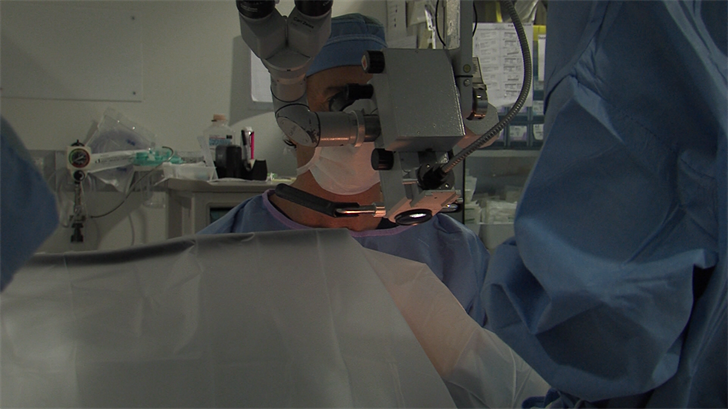 SARASOTA- Cataracts are the leading cause of blindness. Sight can be restored with a simple surgery, but for many without insurance, getting their sight back is just out of reach. With their annual Mission Cataract event, Center for Sight is performing over 100 cataract removal surgeries.

Maureen Atkinson was caring for a blind woman when she started having problems with her own eyes.

“I noticed it,” Atkinson said. “I couldn’t do much about it, but I had to take care of her eyes.”

When she passed in May of last year, Maureen saw a doctor.

“My sister paid for me to go to an ophthalmologist,” Atkinson said. “Because I was having a lot of problems, and he said well you’ve got some fast growing cataracts there.”

With no job and no insurance, Maureen lost her independence.

“I gave up my car,” Wilkinson said. “I no longer can drive, I don’t go anywhere, I’m a photographer, I don’t take pictures anymore and that’s killing me.”

Then she heard about Center for sight’s mission cataracts, a program providing the surgery for those who can’t afford it.

“We can change their lives,” Dr. Socia said. “We can make it from where they can’t drive, they can’t work, and they can’t see their children or grandchildren, to restore all of these functions in a short period of time.”

Maureen was nervous about surgery, but eager for the results.

“Being able to see my grandchildren, being able to pick up camera again,” Atkinson said. “Oh, lord being able to go to the grocery store and not having to ask for help.”

“We make a critical opening on the cataract,” Dr. Socia said. “And soften up the cataract, not only does that give a more precise result, it also enhances the safety.”

Then removing the cataract itself takes less than 10 minutes.

“Its state of the art ultrasound technology that basically vibrates,” Dr. Socia said. “It continues the breakup process if necessary, and with some of these cataracts, there the worst in the world they require a lot of breaking up, and then it actually sucks it out when at that time we put in the inter-ocular lens implants.”

Just after the surgery,

Recovery from the surgery should take about 24 hours.

“It’s incredible, it was quick, and it was amazing.”

Maureen will be back at Center for Sight next Wednesday to get the surgery done on her left eye.