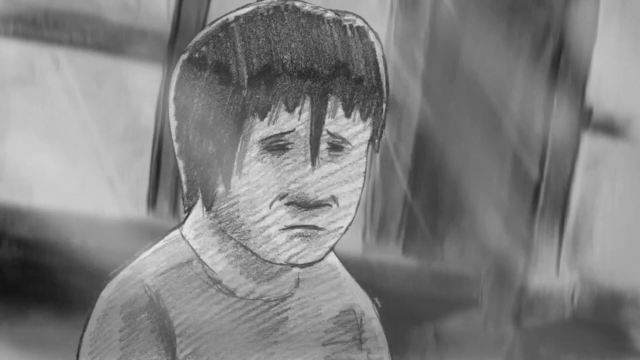 An award winning animated movie taking on depression and suicide continues to gain attention. Now, the director and animator is opening up about how the film comes from his own personal struggles, in hopes it will inspire others battling the same demons.

They say art often imitates life. For Nick LaDonne, that art imitates at 24 frames per second.

As a kid, Nick loved to draw and knew early on in life that he was going to be an animator.

Eventually, he would go on to create his own short animated film, made up of 6,000 sheets of paper. Each sheet carries its own story, with a deep reminder of Nick's past.

"I think as an artist to draw from your personal experience is the best way you can make art. I feel like it is true, it is honest. I personally had these feelings, I am not faking, I been through this and I can tell you how it feels," Nick explained to Fox 29's Bill Rohrer.

Nick's film is called 'Hanging,' and it's a hand-drawn look inside Nick's mind during his darkest moment. After years of being bullied, Nick decided to take his own life.

"This was, without a doubt, the hardest scene that I had to animate," Nick explained.

The film represented a mental tug of war between depression and his mother's love.

"I was thinking about my mom and I had a memory of my mom singing me to sleep as a kid," Nick said, "What really pushed me through was the guilt of losing my mom. It wasn't so much about me, it was about her at that point."

The thought of never seeing his mom again, pulled Nick out of the darkness.

His film ends with two words, 'Hang On.'

"If you can hang on past those two hours or whatever that situation is, you can move forward and make your life better," Nick explained.

Nick made the film during his junior year of college, and after he completed it, the film immediately caught on at various film festivals, winning numerous awards, with his mother by his side.

"I get great response. People are really moved, a lot of people come up to me and say I have past issues with suicidal thoughts, and your film touched me," Nick explained.

Nick hopes this film will help others struggling with depression.

"It doesn't necessarily stop and it is not this perfect, wonderful life , you know you are going to have your ups and you downs as long as you can expect them and handle them you will get through it," Nick said.

Life for Nick now, is looking up. His film 'Hanging' will be screened at mental health conferences this fall.

He is also teaching character design and storyboarding at Rutgers University Camden, sharing his love of art to a generation of animators.