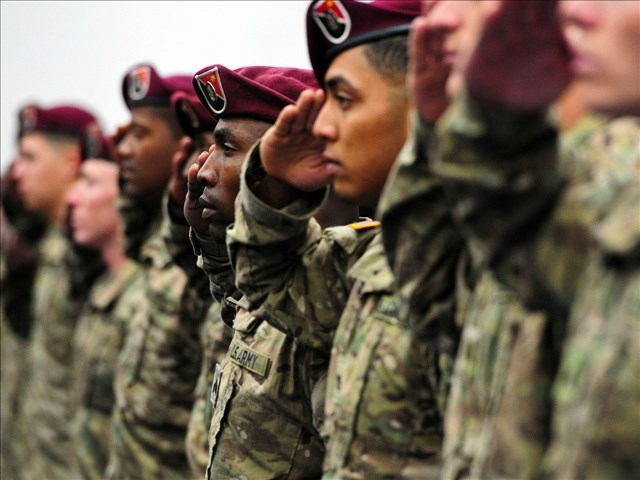 ANCHORAGE — The U.S. Army has announced its decision to “delay the reduction” of the 4/25 Infantry Brigade Combat Team (Airborne) stationed at Joint Base Elmendorf-Richardson.

The reduction would have meant the loss of 2,600 soldiers, plus dependents, from Alaska. Army officials said Monday “that such a move would continue to degrade its ability to respond to new threats in a rapidly changing global security environment.”

“The 4/25 is ready to rapidly deploy and conduct decisive operations in urban and mountainous environments,” explained Acting Secretary of the Army, Patrick J. Murphy, in a statement. “Given continued Russian aggression, the nuclear provocations of North Korea, and the continued threat from ISIL, we need this capability.”

The 4/25 recently completed training last month in Louisiana at what Army officials called “the most realistic, rigorous combat training centers in the world.”

“This is one of the most trained and ready units in the United States Army,” said Gen. Mark A. Milley, the Chief of Staff of the Army.

Alaska’s delegates praised the move, adding their own thoughts on the importance of the brigade to Alaska and U.S. security.

“Because of this decision, the Army sent a strong message that America remains dedicated to our rebalance to the Asia-Pacific, understands our leading role in the Arctic, and is unyielding in our support for our critical alliances with Japan and South Korea,” Sen. Dan Sullivan said in a statement on the decision. “It also sent a message that our communities in Alaska are the most supportive to our military in the country. We have more work to do and we will remain vigilant until the entire 4-25 stays in Alaska for good.”

In a similar statement, Sen. Lisa Murkowski outlined her plans to continue pushing for the 4/25 to remain in Alaska permanently. Her intentions were shared by Sullivan and Rep. Don Young, who said Alaska “must not rest on our laurels” even after the recent announcement.

“Overturning this shortsighted decision continues to be a process; one focused on informing our colleagues, working with the administration, and identifying the various areas where Alaska’s strategic military value has been overlooked or underestimated,” Young said Monday. “I recently told the Acting Secretary of the Army Patrick Murphy that this decision should not be based on anything but the mission and the strategic value JBER’s 4-25 provides our Combatant Commanders. It’s clear, after announcing its decision to retain JBER’s force structure, that the Army has heard our message.”

Officials with the Municipality of Anchorage said Monday that they will continue to prepare for the cuts as a precaution. Earlier in March, the muni called for a study of the economic impact of the loss of the 2,600 soldiers and their roughly 3,500 dependents.

Correction: An earlier version of this story said the decision had been delayed one year. Army officials have since issued a correction. No timeframe was given for the delay.