FRANKLYWNOW - Inside the Gates: A soldier serving on skis

Inside the Gates: A soldier serving on skis 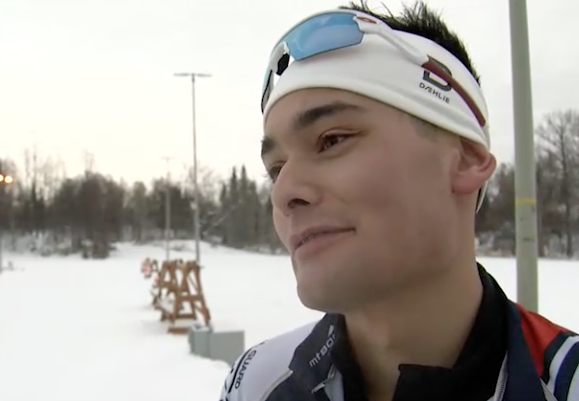 The National Guard has a biathlon team with a winning track record on the international stage. An Alaska National Guardsman is part of that team, serving his country on skis.

Spc. Tadhg Nakada didn’t know biathlon was even an option when he signed up for the Guard until a commander saw him in action.

“I did really well on the PT test and he asked me if I ever skied before and I’ve been skiing my whole life,” said Nakada. “Now, I’m doing this as my job.”

The soldier swapped his camouflage for a new uniform of red, white and blue. So far, it’s been a good fit.

“I like everything about it,” said Nakada of the biathlon world. “I like the competitiveness of everyone racing. I love the shooting, especially when I hit stuff.”

Biathlon combines cross-country skiing and shooting a .22 long rifle at a target 50 meters away. When he started, it was not Nakada’s specialty.

“I was one of those people at basic who couldn’t hit the target at all,” he said, laughing.

He’s been practicing for two-and-a-half years and the improvement shows.

“I usually shoot better, if not the same as most of the other guys that compete. I’m just a much slower skier,” he said.

Nakada’s former coach, Scott Belyea, has seen the guardsman change during that time.

“He’s a little more focused and he knows what he wants and he’s going toward it,” said Belyea, although there are places he thinks Nakada still has work to do. “It’s usually body position and he has a tendency to push, come up and push.”

The soldier hopes his hard work takes him all the way to the biggest sporting stage. The National Guard has had a representative on every Winter Olympic biathlon team since the early 1980s. That’s where Nakada is setting his sights.

With a little more practice, he’s well on his way to representing Alaska and its service members to the world.

The post Inside the Gates: A soldier serving on skis appeared first on KTVA 11.