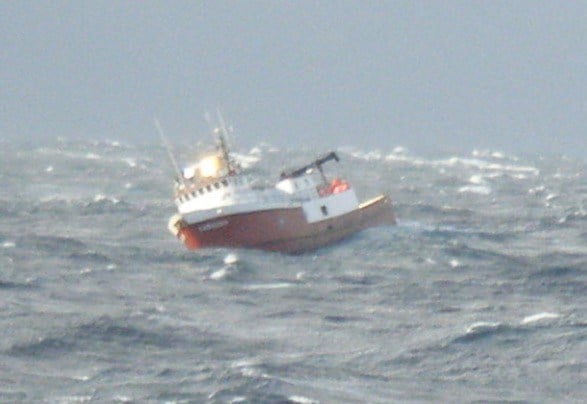 The Coast Guard says four people have been safely airlifted from a disabled fishing vessel in heavy seas Friday.

A helicopter crew attempted to deliver extra fuel filters but rough seas with 10 to 22 foot waves inhibited the Lady Gudny from retrieving them, according to Colclough.

The Coast Guard released a statement saying a 225-foot seagoing buoytender was dispatched after the Lady Gudny became dead in the water 230 miles east of Kodiak. The Coast Guard Cutter SPAR initially tried to tow the fishing vessel but it too became disabled.

Lady Gudny chief engineer Michael Romero said when the SPAR came to get them, the Coast Guardsmen tried to toss them tow lines repeatedly, but one eventually got caught in the SPAR’s propellers, causing that boat to also be disabled. He said the two vessels then collided, causing damage to both of them.

“The crew was suffering on that boat drastically, we were desperate to get out of there,” he said.

Romero told KTVA over the phone Sunday evening that during the moments before their rescue, he worried he and his brother, who was also on board, wouldn’t make it back to dry land alive.

“The boat was a complete disaster, it was completely shipwrecked, there was no doing anything. The walls collapsed, the ceiling was collapsing, the infrastructure of the boat collapsing,” said Romero, adding, “It was twisting because the boat is in dead water. It’s a dead boat in the sea, so the boat rocks in every direction without no momentum, so everything just starts to twist. The boat was making various sounds that it never made before.”

The Coast Guard Air Station Kodiak MH-60T Jayhawk crew eventually came to the rescue in the air, hoisting the four men into the helicopter, and returning them to dry land.

A commercial tug took the SPAR into tow Saturday. Another tug was scheduled to tow the Lady Gudny later that evening.

The Coast Guard reported there were no known injuries to the crew members on Saturday, but Romero said his brother was having trouble breathing and sleeping, so he went to the hospital Sunday night to get checked out and learned he had a punctured lung and broken rib.