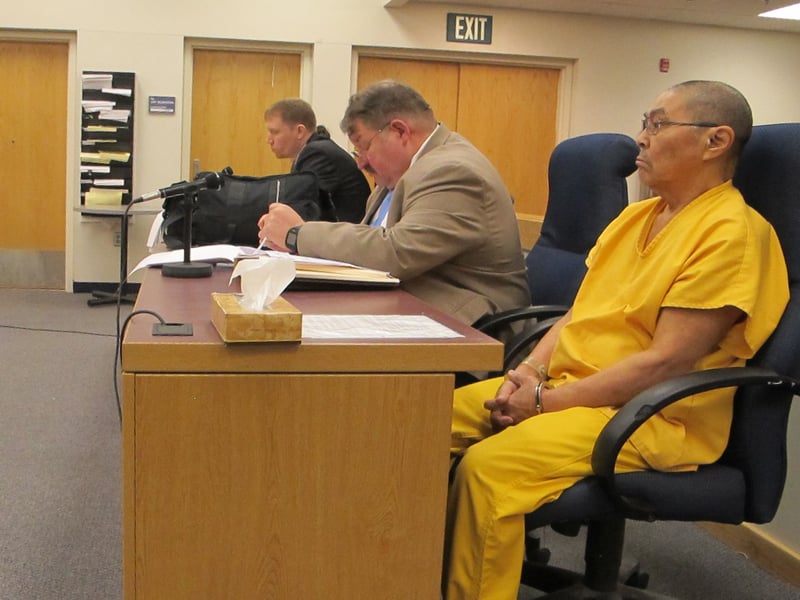 Former Bethel foster parent Peter Tony will spend the rest of his life in prison. Tony was sentenced Tuesday to 66 years in jail with no parole for three consolidated child sex abuse counts in which he pleaded guilty.

Superior Court Judge Douglas Blankenship sentenced the 70-year-old in a two-and-a-half hour hearing with a few victims and families in the room. After Tony did not completely understand the complicated proceedings, Blankenship put it simply for him and the courtroom.

“But you’re a predator and too dangerous to society, so what the court’s intention is, is to keep you in jail until the end of your life,” said Blankenship.

In a February deal with prosecutors, Tony pleaded guilty to charges of sexually abusing a minor in 2012 when he abused a 4-year-old his wife had in day care. He also pleaded guilty to molesting a 12-year old girl in 1998.

Tony’s stepdaughter, Kimberley Bruesch says she was abused by Tony years ago and spoke to the court, saying she hoped other victims would be validated by the sentence. Afterwards she said she’s found closure and added the length of the sentence doesn’t make a difference to her.

“It’s not going to bring my sisters back,” said Bruesch.

Bruesch’s two sisters were abused by Tony and later committed suicide. In considering Tony’s sentence, the judge silently read through one sister’s suicide note that mentioned the abuse. But Tony isn’t going to jail for that abuse decades ago, but for more recent cases.

The court says Tony had been abusing since the early ‘70s. No one knows exactly how many victims, but Tony admitted to “a few.” His stepdaughter, Bruesch says state agencies bear a large part of the blame and says she first reported the abuse in 1982.

“There are agencies that could have perhaps helped him or held him accountable sooner, maybe there would have been that possibility of rehabilitation 30 or 40 years ago, had they done their job. But not only they did they fail to take action based on reports they had received, they licensed him as a foster parent, they continued to ignore one report after another and continued to entrust more children to him,” said Breusch.

Before running a small daycare out of their home, the Tony and his late wife Marylin had been foster parents for 14 years, between 1984 and 1998 at which point they lost their license from the state after a substantiated claim, according to the Alaska Dispatch. There was no report to police at that time, to the knowledge of corporal Amy Davis with the Bethel Police Department. She began investigating in early 2013.

The 66-year sentence is longer than that the 50 years the state actually asked for. Prosecutor Chris Carpeneti said the prospect of rehabilitation for Tony “simply did not exist.” Public Defender Mark Osterman asked for a smaller sentence.

“I think under the circumstances, Mr. Tony is redeemable, and I don’t think the court should throw away the key,” said Osterman.

In handcuffs and a yellow jumpsuit, Tony made a brief statement, saying he grew up without a father and with no guidance. He said drinking had caught up with him and that he was never good in social situations. He apologized after being prompted by his attorney.

“To those I am really very sorry, there’s no words that could really say, not to my knowledge anyway, that I am sorry those things happened,” said Tony.

Tony was sentenced to two 36-year prison terms with 6 years suspended in one case, and 10 years with 4 suspended in another for the total of 66 years to be served. He also got at least 15 years probation, which the judge said is not going to be relevant at Tony’s age . Prosecution indicated that it will be seeking restitution for victims.

Read the story on KYUK.org.