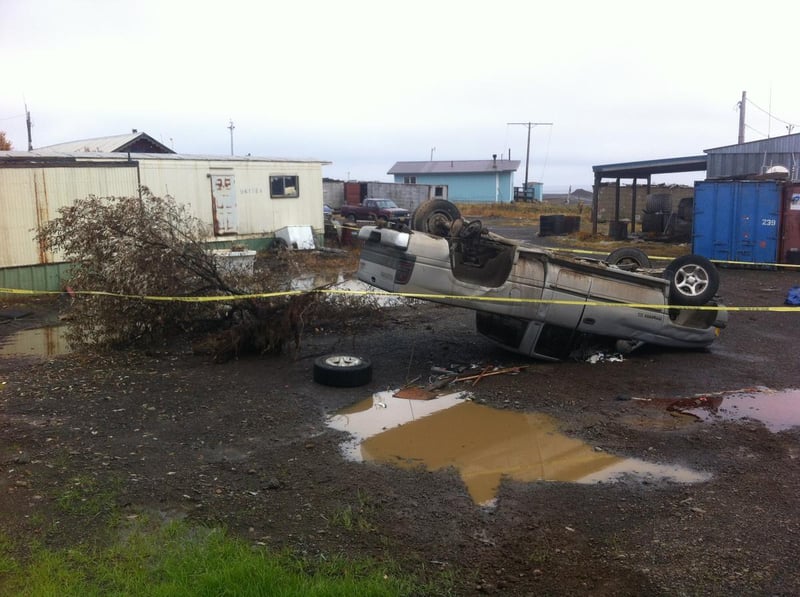 This Dodge truck was stolen early on Oct. 3, 2015, joyridden, and returned worse for the wear. DPD tracked a suspect, slow and steady, who was arrested months later and convicted of the theft at trial.

A jury of twelve handed down a guilty verdict Tuesday in the case of 23-year-old Ronald Johansen. Johansen was charged with stealing a Dodge truck in Dillingham a year ago, which was driven, wrecked, and totaled.

Ronald Johansen, 23, in custody at the Dillingham jail. Courtesy Department of Public Safety via KDLG

“They did a phenomenal job,” she said Wednesday morning after the trial. “I’d like to take credit, I presented the case, but they investigated it, they collected the evidence, they put together the charge and the case, and I have to give them all the credit.”

The truck was stolen and wrecked early on October 3, 2015 in the Dillingham boat harbor. Johansen disappeared from the scene, and disappeared from town. Police stuck with the case, tracking down key witnesses for the investigation, then making sure they showed up to testify at trial. Johansen was arrested pursuant to a warrant when he turned up in town in July, and has remained in custody.

He is scheduled to be sentenced in January, and with fifteen prior convictions, is looking at between one and three years in jail. Dale says the state will likely ask the Johansen be required to compensate the victim for the loss of the truck.

“I want isolation and deterrence to be the main factors that the court takes into consideration at sentencing,” she said. “But also we’d like to fashion the sentence so that we can try to get restitution.”