FRANKLYWNOW - Suspect charged with shooting Fairbanks officer is in custody

Suspect charged with shooting Fairbanks officer is in custody 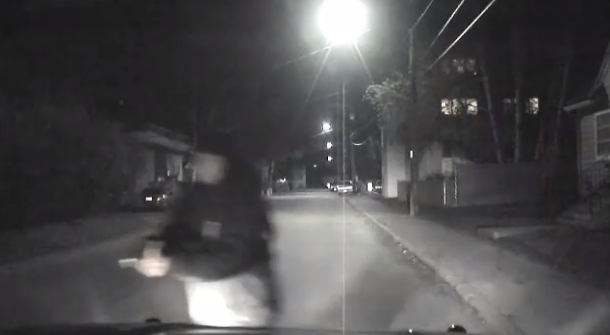 The Fairbanks Police Department says the suspect who fired on one of its officers multiple times Sunday night is now in custody.

Police found and arrest Jenkins-Alexie while “he was taking a walk” around 10 a.m., Johnson said. Police booked him at the Fairbanks Correctional Center, where he is currently being held. Bail information was not immediately available.

Johnson said Jenkins-Alexie is the sole suspect in this case, accused of allegedly shooting Sgt. Allen Brandt and then fleeing in his patrol car.

“After interviewing him, and based on his own admissions and significant corroborating evidence, I can assure the community that he acted alone and that there is no continuing threat to my fellow police officers or our citizens,” Johnson said, adding that Jenkins-Alexie has previously made threats against law enforcement.

After thanking other law enforcement agencies that assisted in the investigation — including Anchorage police, who he said have provided support for the Brandt family in Anchorage — he thanked an unnamed citizen who rendered aid to Brandt immediately following the shooting.

A manhunt is underway for a suspect allegedly seen on camera shooting a Fairbanks police officer just after midnight on Sunday.

The officer, identified as Sgt. Allen Brandt, suffered multiple gunshot wounds and has been flown to Anchorage for treatment of his injuries, which police spokeswoman Yumi McCulloch described as serious. As of 8 p.m., Brandt was stable, according to Fairbanks police.

McCulloch later explained Brandt was shot after responding to multiple reports of shots fired on the 300 block of Seventh Avenue in Fairbanks.

“As multiple calls came into the Dispatch Center, a responding officer radioed that he was shot,” she wrote.

In a press conference Monday afternoon, Acting Fairbanks Police Chief Brad Johnson said Brandt was shot five times — four times in the lower part of his body and once in the chest. Johnson noted Brandt was wearing body armor, but it did not protect him from injuries to his legs, or shrapnel that hurt his left eye.

“Sgt. Brandt was able to exit the vehicle and return fire,” Johnson added. “It is unknown whether or not the suspect was struck.”

After shooting Brandt, the suspect then took off in his patrol car, which was found abandoned a few blocks away, according to McCulloch. Fairbanks police have released two short clips from the patrol cars dashcam that allegedly show the suspect approaching and shooting the officer and then later walking away from the driver’s side, but the vehicle had since moved to another location.

“The suspect is an Alaska Native male in his 20s wearing a dark jacket, dark pants, and a knit hat,” McCulloch said.

Johnson said the shooting occurred as Fairbanks welcomes the first of many Alaska Federation of Natives delegates and their families arriving for the annual convention. He made a point to reassure the community that the race of the suspect was not a factor in the investigation and that the department was doing its best to provide a safe and welcoming environment for the event.

“We have no evidence to suggest that race or ethnicity played a role in this attack on Sgt. Brandt,” he emphasized. “We’re looking to identify a criminal who perpetrated a cowardly act. We are doing so irrespective of his race or ethnicity, but the act he committed.”

His statement follows one from McCulloch, who said police consider the man to be armed and dangerous and urged the public to use caution. Anyone with information on the identity or whereabouts of the suspect, or the shooting is asked to call Fairbanks police at 907-459-6800. A 24-hour tip line has also been established. Tips can be submitted by calling 907-450-6551 or emailing fpdtips@fairbanks.us.

In another statement, McCulloch said Brandt has served on the Fairbanks police force for 11 years.

Brandt was accompanied by his wife and another FPD officer at his Anchorage hospital room. Johnson said he was “awake, alert and in stable condition.” Since he arrived, Anchorage police officers have been by his side for most of his stay. The president of the Anchorage Police Department Employees Association, Sgt. Gerard Asselin, said officers are doing everything they can to support Brandt and his family.

“It really brings to light that it could be you,” Asselin said. “You see yourself in that officer.”

The Fairbanks Police Department Employees Association has set up an online fund to help Brandt with expenses. It was established Sunday and had raised more than $20,000 as of 7 p.m. Monday. Asselin said supporting fellow officers – whether or not they work for the same department – comes naturally.

“In our time of need, we would like it as well,” he said.

The post Suspect charged with shooting Fairbanks officer is in custody appeared first on KTVA 11.