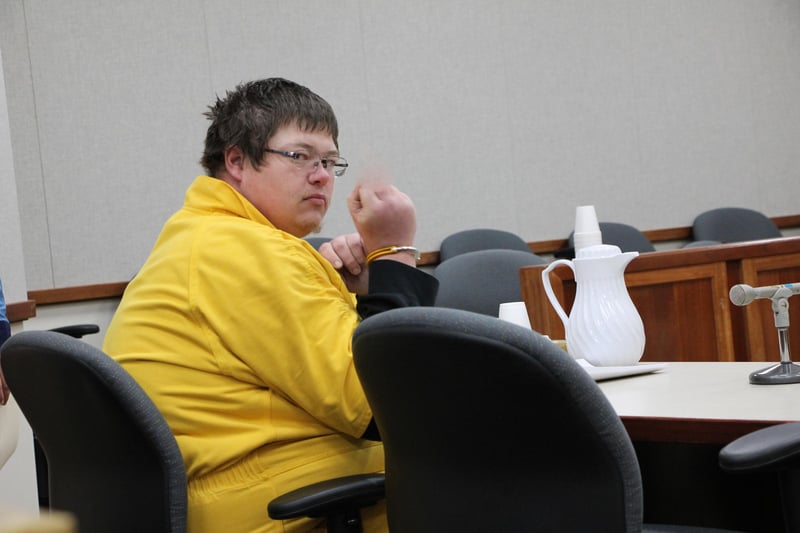 At his 2015 sentencing, Folsom sobbed, screamed, and threatened the adult probation officer trying to take his fingerprints as required

James Lawrence Folsom, 30, was arraigned Saturday morning at the Dillingham courthouse, facing a revocation of his probation and a host of new felony charges relating to drug dealing and weapons possession.

His arrest followed a failed urinalysis Friday morning in Dillingham. “During the UA process the defendant was observed to have a “whizzinator” (fake penis) strapped to his body,” adult probation officer Rex Spofford wrote in his report. Folsom is a convicted felon and was placed on probation for three years following an 18 month jail sentence for dealing black tar heroin in Koliganek in 2012.

Spofford questioned Folsom, who admitted to heroin and methamphetamine use. With the help of state troopers, a search turned up the whizzinator and a bag of synthetic urine on Folsom himself, and drug paraphernalia in his truck outside. Items seized from the truck included a scale, burnt tin foil, cash, pipes, ammunition, and a cell phone.

Spofford, state and wildlife troopers, Dillingham police, and a court service officer continued their search at Folsom’s Mossberry Road home and shed Friday afternoon, an effort that last till the evening. They seized six grams of heroin, which has a street value of approximately $6000, and four grams of crystal methamphetamine. Five stacks of $20 bills, each wrapped in electrical tape, totaling $4,980, were also seized.

Additionally, authorities turned up hundreds of rounds of ammunition, including hollow point rounds, and six firearms Folsom, as a convicted felon, is not allowed to possess. The firearms seized were a Mossberg 4×4 bolt action 30-06 rifle, a Remington 12 gauge pump shotgun, two Ruger 10-22 semi-automatic rifles, a Westpoint .22 caliber semi-automatic rifle, and a Glock 10mm semi-automatic handgun. Some of the ammunition was hidden in secret compartments, and some of the drug paraphernalia was hidden in a children’s clothing. An empty safe reeked of marijuana.

A wireless motion sensor was hidden on a tree in the front yard, which activated an audible alarm each time motion was detected in the driveway. “This type of alert system is utilized by drug traffickers in order to give them early warning of potential threats/presence of either law enforcement or other dangers to their illegal enterprises,” AST Sgt. Luis Nieves wrote in his sworn affidavit.

State troopers spent hours processing all of the seized weapons and paraphernalia late Friday. Altogether, it “makes a strong argument the defendant has been engaged in the sale of controlled substances for some time,” wrote Spofford.

Folsom was arraigned Saturday morning on five new felony charges and a petition to revoke his probation. The new felonies include two charges for alleged drug dealing, one for heroin and one for meth, and two weapons misconduct charges for being a felon in possession of a firearm and possessing a firearm relating to drug crime. He’s also been charged with tampering with physical evidence for use of his whizzinator and synthetic urine. If convicted on all, Folsom would face a minimum of 20 years in jail.

Folsom said the money found in the house was profit from fishing, which he was paid recently. He claimed ignorance of the rest.

“I mean I had a little bit of money, yeah. I made that money, legally,” he told Magistrate Judge Tina Reigh. “I mean what the f—, I mean excuse my language, but everybody’s putting me out to look like I’m just this huge frickin’ Pablo Escobar drug lord. They apparently found a couple grams here and a couple grams there. I don’t know anything about it.”

The state requested bail be set at $50,000 cash with a third party custodian requirement. Folsom found that unreasonable.

“I don’t have any money … It’s impossible for anyone even if they were a drug king pin like they’re pointing me out to come up with fifty grand cash. I’ve never even seen fifty grand in my entire life. I was thinking maybe five grand, maybe somebody would borrow me or something, I don’t know.”

Reigh agreed to the state’s request for bail terms.

Folsom was arrested in 2012 after WAANT, the Koliganek VPSO, and Dillingham Police coordinated a bust at a house in Koliganek. He was found to be in possession of black tar heroin hidden in a fake soda can. That case was litigated for several years before he pleaded guilty and was sentenced to 36 months with 18 months suspended and three years of probation. Folsom may be ordered to serve some of the 18 months of suspended time if Judge Daniel Schally finds he violated his probation. In lengthy sentencing remarks in 2015, Schally attributed Folsom’s dealing to his heroin addiction, likely brought upon by chronic pain, and believed the mix of jail time and supervised release would steer the young man straight.

As that hearing ended, a sobbing Folsom became highly uncooperative when ordered to remand for his jail time immediately. Schally warned him that he was on “thin ice,” then quickly fled the bench to avoid seeing the spectacle unfold. Schally and Folsom will discuss these matters again when he appears for a petition to revoke probation hearing next Wednesday.

The post Dillingham drug dealer brought down by ‘whizzinator’ appeared first on KTVA 11.