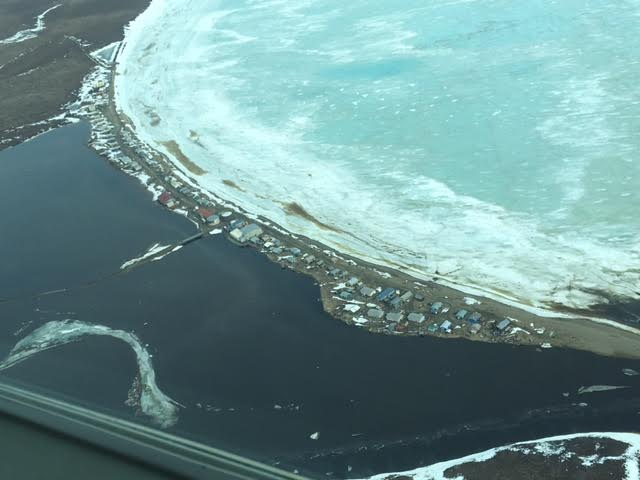 A community in northwest Alaska is on high alert, preparing for a possible evacuation.

A Flood Warning is in effect for Deering until 3:45 p.m. Friday afternoon. Two disaster declarations have been issued as a result of the flooding, one by the Village of Deering and another by the Northwest Arctic Borough.

The declarations free up resources, including the possible use of State of Alaska equipment, should it become necessary, according to Jeremy Zidek, spokesperson for the Alaska Division of Homeland Security and Emergency Management.

Deering sits between the Inmachuk River and Kotzebue Sound. Two ice jams on either side of the community are already causing flooding. Sea ice is blocking the mouth of the open river, while the other jam is just above the town.

Local officials say the water is already rising. It’s now up to the steps of the clinic, and the airport road is under about three feet of water. Boats were used to transport residents to the airport Wednesday. As of Thursday evening, the water had receded enough to allow a four-wheeler to access the airport, said Zidek.

The Alaska-Pacific River Forecast Center says the water level will likely rise again, and people need to be ready to get out if the ice jam breaks.

“This is an unusual case and because we have that ice jam, that impounded water above the river. I just want people to pay attention that this could end up being a serious event,” said Edward Moran, Senior Hydrologist, Alaska-Pacific Forecast Center.

Emergency managers say the boats are in place if they need to evacuate the community. About 120 people live in Deering.