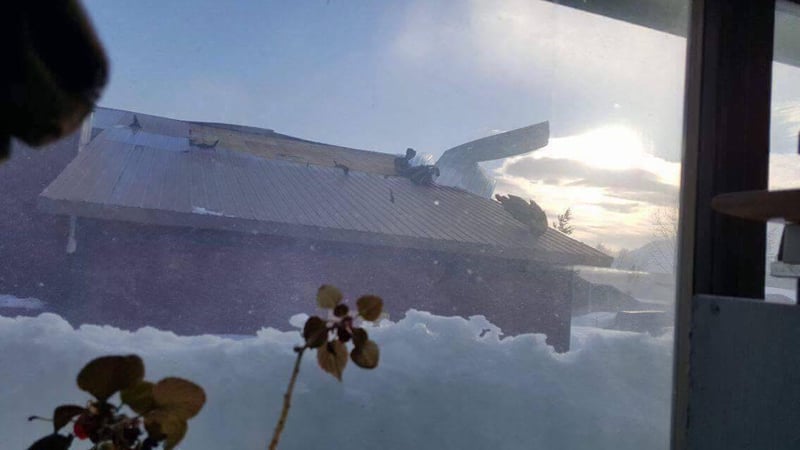 The winds started picking up early Thursday morning and haven’t really let up since. People in Valdez are enduring wind gusts between 50 and 80 mph and a peak wind gust on the scale of a category two hurricane at 98 mph.

In a video shared by Roy Corral, wind can be seen blowing the snow sideways over Mineral Creek Bridge, reducing the visibility and creating a dangerous driving situation on top of the glaring ice.

The City of Valdez officials say they were expecting the high winds and sent out a notice to the community last week, asking people to be prepared. Allie Ferko, the public information officer for Valdez, says most people in town are used to the high winds.

“We batten down the hatches,” Ferko said. “Visitors always come and say, ‘you know, I don’t see any picnic tables out in people’s yards, umbrellas out,’ and that’s part of the reason. We know what our winter weather is like and we prepare accordingly.”

Some roofs, like the one below that was captured by Joanne Winney, couldn’t hold up to the wind.

The city says several vehicles at the airport, high school and city hall had broken windows from the high winds.

The local auto glass repair shop says they’ve been busy with repair requests coming in from wind damage, including windows on five vehicles that were hit by flying debris at the high school.

“I just put in a glass order for about 12 pieces of glass, so, so far it’s been at least 12, 15,” said Adaya Braxton, co-owner of Glacier Auto Glass in Valdez. “I’m sure there’s more that have had damage, but that’s just who we’ve talked to since the weekend.”

Braxton says they’re used to the wind, but this round has been a bit more intense.

“We’ve had gusts to like 98 mph, so there’s a lot of debris and I think just the wind itself and some back pieces of glass may have just been blown out because of that,” Braxton explained. “So all different sort of things. It’s pretty crazy.”

Glacier Auto Glass will be giving anyone with broken windshields and back glass from the winds 25 percent off, and they have crash wrap available for anyone who needs it.

KTVA 11’s Melissa Frey can be reached via email or on Facebook and Twitter. Got a weather-related photo or story idea? Email the team at weather@ktva.com.