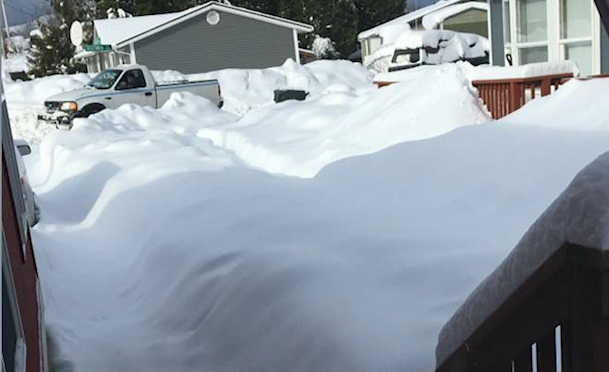 Anchorage has yet to see a single snowflake in the month of March, but the same can’t be said for the Southeast. It was a slow start to the season in the southern inner channels, but they’re making up for lost time this week.

The climate records for this area are tracked on Annette Island, where they’ve picked up 19 inches of snow in the last eight days. That’s the most snow they’ve seen this time of year since 2009.

Just north in Ketchikan, they picked up another 6 to 8 inches overnight. School and several activities were cancelled in town Wednesday while the area was under a winter storm warning.

“Ketchikan has been so spoiled in the wintertime that I think everybody’s used to getting away with driving two-wheel drive vehicles with summer tires that may not even have a lot of traction left on them and people don’t put on their studs or chains anymore, and I think they’re getting reminded what a winter is like in Alaska,” said Nick Kepler, the street maintenance supervisor for the City of Ketchikan.

Gracie, 7, enjoys playing in the snow with her dad. Her mom says their property is covered in more snow than she’s ever seen.

It’s been adding up since last week. Community radio station KRBD captured video outside their studio last Tuesday. It was already enough to break out the snow blowers.

On Friday, the snow could be seen blowing sideways while road crews were hard at work.

“There’s just so much snow, there’s so much accumulation that there’s nowhere for the plows to plow anymore, so the berms on the side of the road are getting to be you know four-, five-, six-feet tall in some places,” Kepler said.

The road crews have been working 24/7 to keep the roads open.

The snow showers will taper off Wednesday night, but the Ketchikan Gateway Borough School District has already announced schools will be on a two-hour delay Thursday.

More snow is expected next week, and Kepler says they’re already planning for when temperatures warm up.

“As soon as it starts to warm up and we get the rain on this snow, we’re going to change our focus from plowing snow to preventing floods,” Kepler said. “Because we have all of our drains iced over and we have to find all those, uncover them and make room for all this snow melt.”

If you have a weather question for meteorologist Melissa Frey, she can be reached via email or on Facebook and Twitter.