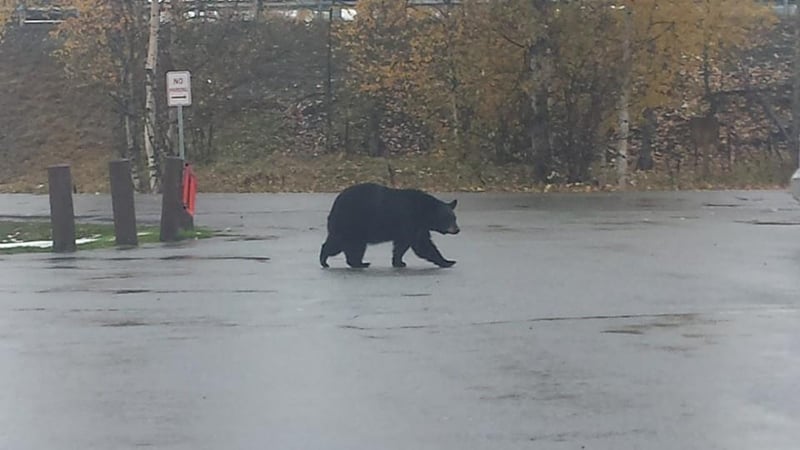 A man camping in the woods behind the Centennial Park baseball fields killed a black bear cub with a spear Friday morning, officials say.

Two bears had been seen in the neighborhood prior to the reported killing, according to Anchorage Police Department spokeswoman Jennifer Castro.

APD initially responded to the area of 8000 Boundary Avenue after receiving reports of gunshots in the area.

John Wayne, who lives nearby, said he was contacted by a camper about the bears — a cub and a sow. After the cub was killed, he said he tried unsuccessfully to scare the sow off by making noise and firing warning shots.

“But she was just trying to circle,” Wayne said.

Food and trash lured the cub and sow to the area, said Alaska State Trooper Levi Duell, who responded to the park around 11 a.m.

“Unfortunately, that bear was there because of people leaving their food in an area that attracted the bear,” said Duell, who fired a rubber bullet at the sow in an attempt to get it to leave the area.

Duell said a citation was issued to the camper, 49-year-old David Tandler, for negligent feeding of game. Alaska State Trooper spokeswoman Beth Ipsen says the stabbing was “deemed in defense of life and property.”

“The bear was reportedly trying to get into a tent that housed some children,” Ipsen said in an email. “At that time, Mr. Tandler stabbed the bear with the spear, apparently hitting an artery.”

The children were not on scene when troopers responded, according to Ipsen.