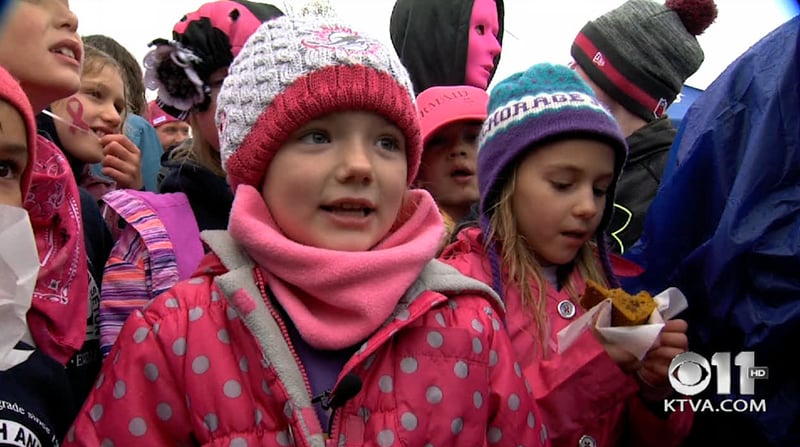 The Making Strides Against Breast Cancer 5K kicked off on Saturday morning with more than 1,500 runners and walkers. They were all gathered in the Delaney Park Strip for the same reason — to help researchers eliminate breast cancer and support those fighting the disease.

This is the fifth year the American Cancer Society has hosted the fundraising event in Anchorage.

One fundraising team was a group of students, parents and teachers from Saint Elizabeth Ann Seton School in South Anchorage. Led by second-grade teacher LouAnn Verbout, the school raised money after hearing Tiffany Gregory – the mother of two students at the school – was battling breast cancer.

“Every child in this school participated,” said Verbout.

They put collection jars in each classroom and asked people to donate their spare change. Verbout initially set a goal of raising $500. But the small school of 157 students soon passed that number before doubling, and quadrupling, that goal. They raised a total of nearly $2,300. Verbout said the benefits of the fundraising were two-fold.

Verbout’s mother passed away after a battle with colon cancer. She believes bringing cancer into the societal dialogue can help with awareness and, therefore, increase cancer screenings.

“I think we need to talk about it…because it’s a part of our lives,” said Verbout.

A total of about $230,000 was raised for the American Cancer Society at the Anchorage Making Strides event. The money will go toward cancer research, as well as patient support.