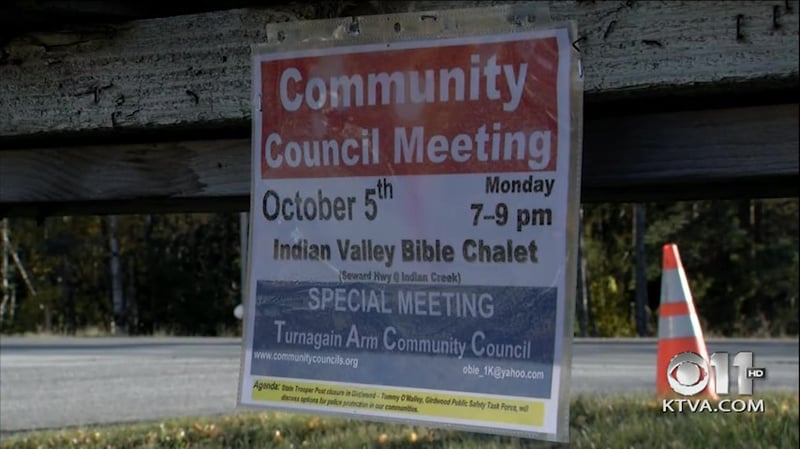 Come Jan. 1, Alaska State Troopers will pull out of Girdwood due to budget cuts.

Three troopers will still patrol the Seward Highway, but there will be no protection within the community. Girdwood is in negotiations now to contract with the Whittier Police Department, but three communities along the highway — Rainbow, Indian and Bird Creek — don’t have as many options.

A member of the task force said while they’re negotiating with Whittier, Girdwood is also looking at other options, like forming their own police force and even suing the state for “abandoning responsibility for police protection without providing a substitute.” If they sued, they would file for an injunction to stop troopers from leaving.

Even if Girdwood raises their property taxes and contracts with Whittier, those officers wouldn’t respond to the other communities along the Turnagain Arm. They’re part of the Anchorage Municipality, but they would have to pay for Anchorage police services. Rainbow, Indian and Bird Creek don’t have the ability to raise their own taxes to come up with the money.

Tommy O’Malley with the task force said the Anchorage Police Department would respond for free, but only in specific emergencies like an active shooting or natural disaster, and they wouldn’t follow up to investigate or adjudicate cases.

People who live in Turnagain Arm have divided feelings on the issue. Many said troopers aren’t needed, that they all know each other and do community policing.

Others feel like APD services should be provided to them for free, and worry that not having any protection makes them an easy target for crime.

“We’re telling people what’s going on, what the options are. At the same time, we’re concerned that while I’m telling you guys, half of our houses are standing empty, and there are no cops. The criminals are listening to the TV show and they’re going, ‘what an opportunity,'” O’Malley said at the meeting.

People left the meeting with many unanswered questions, one of them: if they call 911 after Dec. 31, will anyone come to help them?