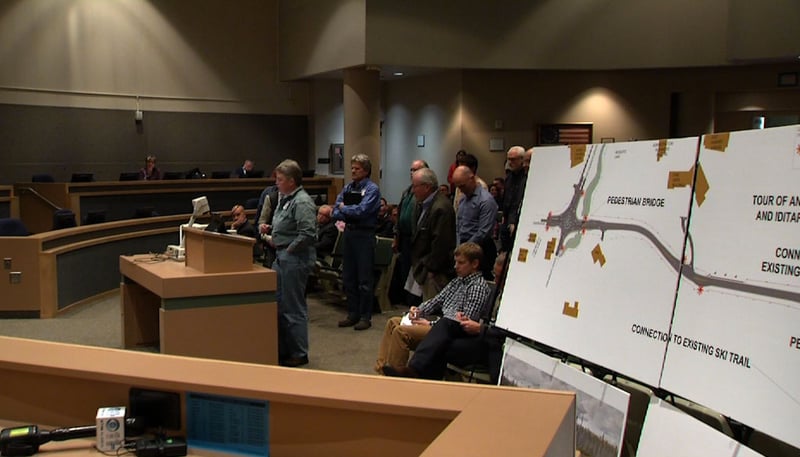 The Planning and Zoning Commission voted to approve the design of the controversial U-Med District road project, but with some additions to address safety and flooding concerns.

The commission heard public testimony Monday night about the plan, which extends Bragaw Road into the district with a goal of easing congestion for drivers coming from the north and east.

Staff at Planning and Zoning had recommended the whole plan be sent back for a redesign. Instead, the commission approved the design but made recommendations:

They want to ensure a pedestrian bridge at the south end of the road is included. It is already part of an updated plan.

They want a separated pathway for pedestrians, at least seven feet from the paved road.

They want a 30 mph speed limit maintained to protect moose.

They want an enhanced crosswalk installed at Bragaw and Northern Lights Boulevard to address safety concerns for the many pedestrians and East High School students in the area.

Lastly, they heard testimony from residents living downstream from campus. The road will pave over wetlands, and some people are concerned it will lead to additional flooding in areas like Valley of the Moon Park. The Department of Transportation and Public Facilities will pay a fee for watershed mitigation, and the commission voted to ensure that money will go directly to address Chester Creek watershed issues.

The commission heard more than two and a half hours of testimony from people for and against the road, although more of the speakers we against it.

The group Citizens for Responsible Development U-Med held a rally before the meting started. The state set aside $20 million to cover the project, a price members say is too high for a 0.7-mile road. They’re also concerned about the loss of green space, recreational trails and increased traffic in the area.

Citizens for Responsible Development U-Med chairperson Carolyn Ramsey says even the students at University of Alaska Anchorage are against it.

People who spoke in favor included representatives from Providence Alaska Medical Center, UAA and Alaska Pacific University. They say it allows easier access on and off campus and reduces congestion currently felt in the U-Med District.

“If you’ve been on campus in the afternoons or in the morning, frequently at our class schedule changes, UAA Drive gets backed up. If you’re heading north, it gets backed up onto Providence Drive,” said Chris Turletes, associate vice chancellor for Facilities at UAA.

The Planning and Zoning Commission’s vote doesn’t mean this project is ready to start construction. It still has a number of hurdles to clear in a lengthy process.

A spokesperson from the mayor’s office says Mayor Ethan Berkowitz has also not made a decision if he supports the road plan. He inherited the plan from former Mayor Dan Sullivan.