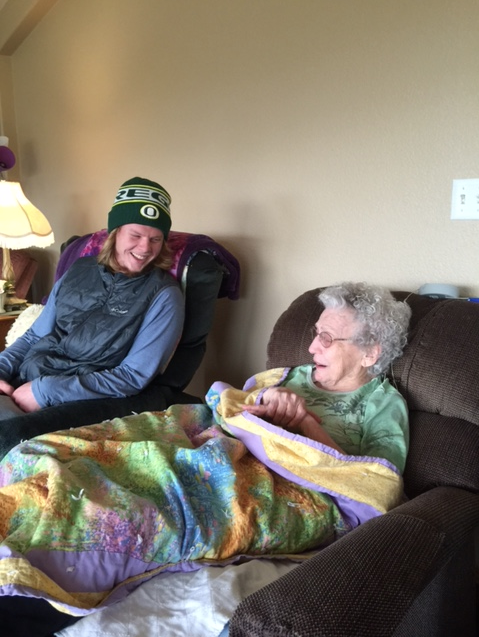 It will be a celebration to remember for 22-year-old Tyler Park and his great-grandmother when she turns 100 years old this month.

Approximately 4,000 miles separate Park, in his fifth year at the University of Memphis, and Mildred Buzby, who has called Alaska home since the 1930s.

Park says he and Buzby, who goes by Tiny, haven’t seen each other since Park was a teenager.

“I think the last time she would’ve seen me was well over five years ago,” said Park of Tiny, who enters the centenarian club on Oct. 28.

A significant occasion deserved an equally grand gesture, says Park — “Go Big for Tiny” — which began as a fleeting conversation he had with a friend, Ryan Barton, in May.

“I said that I felt like I might need a break from school,” said Park. “And, very hypothetically, I said, ‘My great-grandmother lives up in Alaska. She’s turning 100 at the end of October. Maybe I should just ride my bike up and see her.”

Barton was actually on board for a bike tour to the Last Frontier, so they began planning and collecting funds via crowdfunding. The pair took off from Tennessee on July 16 and arrived in Wasilla on Sept. 26.

“First full day of riding ahead of us in Alaska.”

After the cross-nation trek, Park says there was just one more trip to make — a visit to Tiny’s assisted living home, the finish line.

“I always kind of had a little fear in the back of my mind, like, what if she passes?” said Park. “What if she goes before we get there?”

But they arrived in Alaska, making for an emotion-filled reunion for the great-grandmother and great-grandson both. A candid photo, taken by Park’s grandmother, captures the “real” moment perfectly, Park says.

“She was pretty excited,” he said, recalling the moment. “Once she saw me, her eyes kind of welled up. And I sat down next to her and we talked … She just wanted to sit there and chat with us because she hadn’t seen me in a while.”

The two now have a few weeks to catch up on the years they’ve spent away from each other, before Park heads back to Memphis at the end of this month. He says he’s opting for a flight back to the Lower 48.

The post U of Memphis student bikes to Alaska to celebrate great-grandma’s 100th birthday appeared first on KTVA 11.