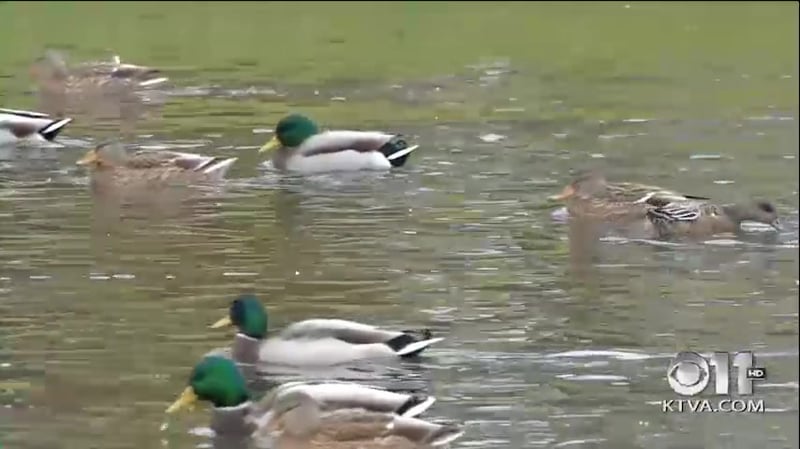 For years, Cherie Northon with the Anchorage Waterways Council has been asking people not to feed the ducks at Cuddy Park in midtown Anchorage. Constant feeding, she said, is keeping too many of them around. But Northon said the message is more important now than ever since some of the highest levels of fecal coliform have been discovered in the pond.

Northon said a professional lab tested the pond water in late August. It found fecal coliform levels around 80 times higher than the State recommends for safe contact with humans. Northon said the water isn’t safe for people or pets.

“It’s still way over what you shouldn’t even be splashed with,” Northon said. “It’s alarming and you can get all sorts of horrible diseases.”

Too many ducks can be dirty, but there’s another concern — When they come in contact with airplanes, they can be downright dangerous.

Wildlife biologist Spencer Nelson spends a lot of time hazing birds at the airport. He said a few winters ago there was an incident where a duck struck a plane.

“It was a 737 leaving Anchorage International Airport and struck a duck in midwinter,” Nelson said. “I’m fairly certain it came from the population at Cuddy Park.”

Nelson said there was no damage that time, but the danger was real, and it’s fueling a push to do something.

Anchorage Parks and Recreation Superintendent Josh Durand said keeping people further back from the water would help. This spring they’ll plant more vegetation to act as a barrier around most of the pond and put up temporary fencing till it grows.

“The temporary fencing and the increased vegetation might in itself change human behavior,” Durand explained. “You won’t have this easy interaction with the wildlife.”

Northon said the Waterways Council has grant money to conduct an educational campaign. She said they plan to put up lots of signs at Cuddy Park explaining why feeding waterfowl isn’t a good idea.