FRANKLYWNOW - Motorcyclist killed in crash with moose on Minnesota Drive

Motorcyclist killed in crash with moose on Minnesota Drive 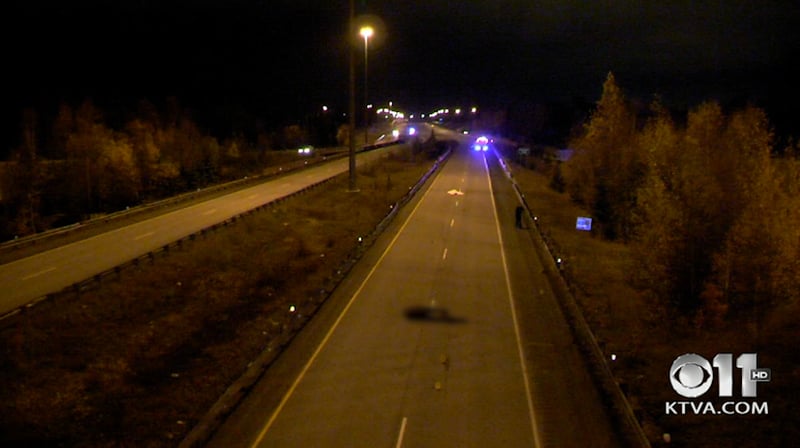 A section of Minnesota Drive was closed for hours as police investigated a fatal crash in the overnight hours into Sunday morning.

Just after midnight, a motorcyclist — identified as 38-year-old Justin Jones — was traveling northbound on Minnesota Drive when he collided with a moose just past the Dimond Boulevard overpass. Both Jones and the moose were pronounced dead at the scene, according to a release from the Anchorage Police Department.

Following the collision, Jones’ motorcycle continued down the roadway and into oncoming lanes of traffic. Police say an SUV avoided colliding with the motorcycle and hit a guard rail in the process. The driver of the SUV was not injured.

Jones’ next of kin have been notified, APD says.

This is the second moose collision this weekend. Early Saturday morning, police say a man was killed after his vehicle collided with a moose in South Anchorage, near the intersection of De Armoun Road and Norgaard Road.

Ken Marsh with the Alaska Department of Fish and Game says this is one of the most important times of the year to look out for moose on the roads.

“Moose are in the rut. They’re active, they’re running around town,” says Marsh. “They’re not paying as much attention as they normally do. It’s really easy to have one bolt out into the middle of the road as it goes through the course of the breeding season.”

Back-to-back fatal moose-involved crashes in Anchorage are uncommon, Marsh adds. But Fish and Game has been a rise in moose-related collisions in Southcentral this year, especially in the Mat-Su Valley. There have been about 80 moose killed on Mat-Su roads since July, double the average for this time of year.

The post Motorcyclist killed in crash with moose on Minnesota Drive appeared first on KTVA 11.