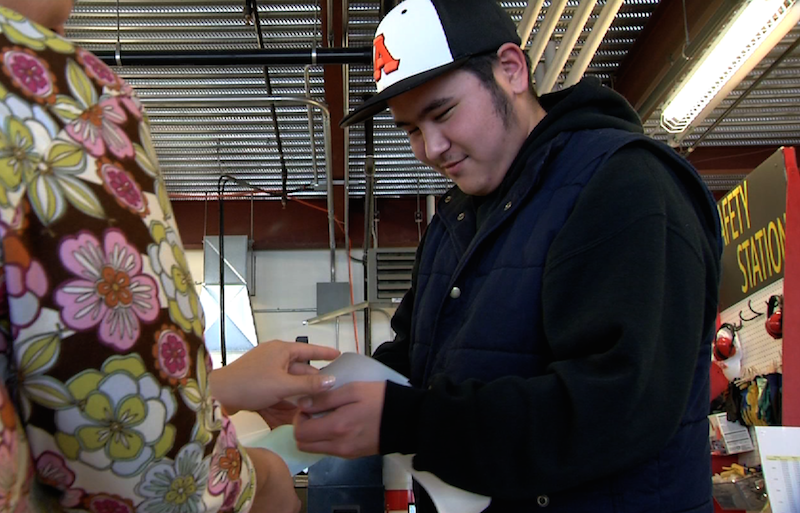 Several posters of Alaska Native artisans line one of the walls of Mr. Luke Segarra’s classroom at Central Middle School of Science.

In many ways, the laminate prints depict the first scientists and engineers of Alaska, says Lael Bach, youth advocate for the Cook Inlet Tribal Council (CITC).

“There’s always been technology and culture since the beginning of time,” said Bach. “And we want to get kids to recognize that and be proud of that and link with that.”

Not only do the students see a version of themselves on the walls of Segarra’s classroom, but they can look left and right and see themselves in their peers.

“You are surrounded by people who are similar to you in not just looks but customs and culture,” said Renee Fredericks, CITC director of youth education and employment services, of the two grant-funded classrooms at Central Middle.

In partnership with the Anchorage School District, CITC uses mostly federal funding provide both culturally enriched and STEM-based curriculums to the students, who are Alaska Native and/or American Indian. The council recently received a $600,000 grant from the U.S. Department of Education to continue preparing Native children for college and careers.

“We’re really able with this kind of flexible funding to take the time and step back and do more project-based learning,” said Fredericks, adding that smaller class sizes and peer-to-peer learning help. “We just want to give the kids the foundation that they need to ensure they are meeting their proficiency goals for the standardized testing.”

She says it’s the connection to the school that will keep the students coming back.

“We’re trying to decrease our dropout rates,” said Fredericks. “These kids are not going to get to college if they’re dropping out.”

Nationally, the high school graduation rate among Native high school students is “the lowest of any racial/ethnic demographic group across all schools,” according to the White House’s 2014 Native Youth Report. Bach — whose primary job is to remove whatever barriers to education the students might have — says CITC has seen success in school engagement and attendance rates.

“One of the hardest things when kids come from the village is they’re thrown into a school that might be as big as their village,” said Bach, who says that’s one barrier unique to Alaska Native students. “I want to make sure that when they come to school they are ready to learn, and that means they’re feeling like they’re wanted and respected — both as individuals and culturally.”

She adds that she wants the students’ parents to also get that buy-in, so Bach makes house calls when necessary. Her favorite success story to share is a family who didn’t come in-person to enroll in the school, so she went to them.

“Now, the family volunteers for everything,” Bach said. “They’re there for every field trip, every dance, everything … because they feel that connection to the school.”

Technology/culture curriculum continues outside of the classroom

On any given weekday, CITC’s fab lab is buzzing with energy. And at any given moment, the space is filled with the sounds of 3-D printers, industrial sewing machines, laser printers and even a shop bot, to name a few.

But the noise doesn’t bother West High School student Benjamin Hunter-Francis II. To him, it’s just another day at the shop.

Short for fabrication lab, the building is located next to CITC’s headquarters in East Anchorage. Hunter-Francis has used the lab to work on a number of projects, from a wooden sled to a DNA molecule structure he submitted for his biology class. Instead of writing his accompanying paper, he laser cut the write-up onto wood.

“I decided to go with wood because … it’s never been done before,” said the 17-year-old.

Hunter-Francis moved to Anchorage five years ago from Marshall, Alaska — in the Lower Yukon School District.

“It was tough at first,” he said of the transition. “Because I was two years behind the Anchorage School District. Now, I’m all caught up, and I love it here.”

Hunter-Francis’ fab-lab-produced science project earned him “full credit,” he says. But the scope of his projects have also reached personal depths. A wooden sled he created on the shop bot is engraved with his corporation and the words “Native Pride.”

But there’s one fab lab project especially close to Hunter-Francis’ heart — a gift to his mom for Mother’s Day: a laser-cut image of an eagle, whose talons are holding a banner that reads “Benjamin G. Francis.”

It’s a tribute to Hunter-Francis’ late father, who passed away from cancer when he was 6 years old.

“It was tough — I got to know him a little bit but not that much,” said Hunter-Francis, recalling fond memories of the pair taking boat rides and snowmachine rides around his hometown. “I thought of it to do a tribute because this was like our favorite bird, the eagle, because it soars high. And now, when I see an eagle, I always think about him.”

Hunter-Francis is his father’s namesake — and says he feels “in touch with his spirit.” He adds the fab lab is helping him keep in touch with all his ancestors.

“It’s important to keep that tradition alive,” said Hunter-Francis. “I don’t want to see it die; I want to continue living the life that my ancestors lived. I’m very proud of where I came from.”

For students who were raised in rural Alaska before coming to Anchorage, like Hunter-Francis,”their sense of culture is a little different than kids who have been born and raised in the city and don’t have that connection to the land,” says fab lab instructor Tasha Ryder, calling the fab lab a meeting of the minds and a safe place to fail.

Ryder says one of the fab lab’s goals is bringing technology and culture together in harmonious ways, like the laser marquetry technique Hunter-Francis is perfecting.

“It’s a very ancient marketry that’s been around since the 1600s, but it’s traditionally done by hand,” she said of the art form. “There are some purists in the woodworking community that say, ‘This isn’t marquetry’ … Well, yes it is, it’s just newer tools.”

Some of the tools found in the fab lab will be determinants of the “next great digital divide,” notes Ryder. She’s hoping her students will be well-equipped as they make their way from middle school to high school and off to continue their post-secondary education.

“If we want to have our students prepared for that future, we’ve got to start giving them the tools now,” Ryder said. “So that they can say, ‘I am an engineer. I am an artist. I am a maker.'”