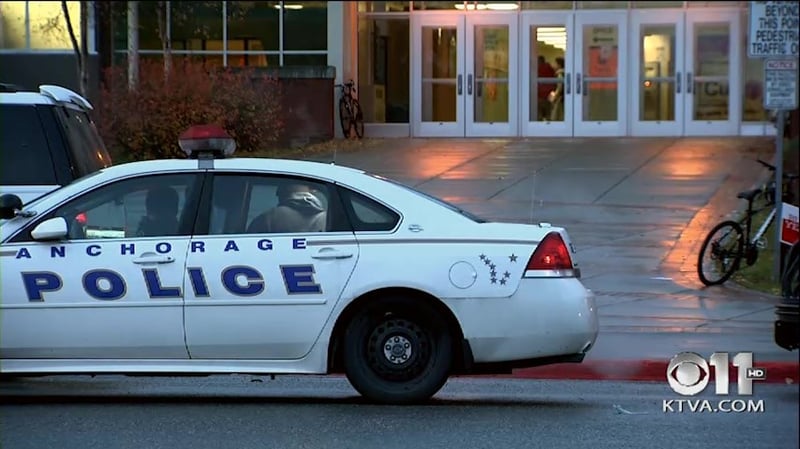 Shortly before 8 a.m., a man and woman entered the high school. The man then demanded to see his children — students at the school, said Anchorage Police Department spokesperson Jennifer Castro. Court documents show the man, later identified as 39-year-old Kalepo Timoteo, believed one of his children had walked away from the school after being dropped off earlier that morning.

Timoteo asked school staff to confirm his children were in class, according to court records. After staff responded “that the kids were in school as they always were,” Timoteo demanded to see his children to confirm. The children’s mother was with Timoteo at the time and told staff she didn’t want them brought to the office “because she didn’t know what [Timoteo] was going to do.” She also told them he had a gun.

Staff alerted the school resource officers. When they arrived, Timoteo was pointing his gun at the children’s mother. SRO Ben Yoon came between the woman and Timoteo, resulting in the gun being pointed at him.

The officers successfully defused the situation and the man surrendered peacefully. He was taken into police custody, and “the entire situation was resolved in about three minutes,” Castro wrote.

The children’s mother told police Timoteo was bipolar and had not been taking his medication, according to court documents. She also said during the drive to the school, Timoteo became agitated with her and said she “was the reason the kids acted as they do.” At one point he allegedly pulled out the gun and threatened to shoot her.

Despite initial reports from APD of a lockdown, Anchorage School District spokesperson Heidi Embley said there was no lockdown at the school. Although officers were preparing to go into lockdown mode, Castro said the situation “was resolved too quickly for the lockdown process to be implemented.”

ASD sent out a special thank you on social media to SROs Yoon and Gary Winborg for their quick response at West.

“This incident serves as a reminder of the value of having police officers in our schools to be able to respond quickly to dangerous situations, keeping our students and educators safe,” Castro said.

Timoteo has been charged with one count of fourth-degree weapons misconduct and three counts of third-degree assault, police say.