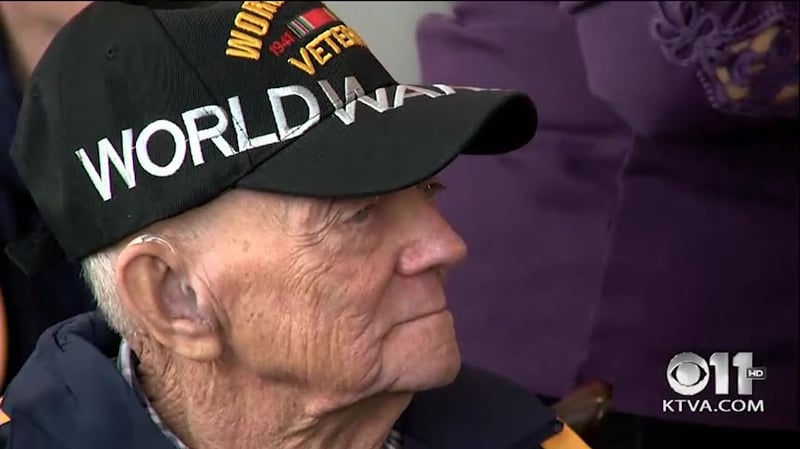 The number of World War II veterans is dwindling, but a local group has one last mission for the surviving members.

Amidst the hustle and bustle of Ted Stevens Anchorage International Airport on Tuesday, there was a celebration and a warm welcome for some very special passengers. 23 veterans from across Alaska embarked on a trip of a lifetime with the Last Frontier Honor Flight.

“I don’t know any of these guys but I will know them by the time we return,” said WW II veteran Ralph Kurka.

The group is heading to Washington D.C. to visit the monuments created to honor their sacrifice. They’ll be gone five days and four nights.

Twelve of the participants are WW II veterans, 11 served in Korea and just one represents the Alaska Territorial Guard.

“I just want to thank you for your service and enjoy yourself in Washington,” Lt. Gov. Byron Mallott said while shaking the hand of 90-year-old Johnnie Ticket Sr.

Ticket is the last living ATG member from his village of Selawik.

“So many people forget the involvement that so many of our native scouts had in World War II,” said Senator Lisa Murkowski.

Ticket has only left the state once before. Quiet and humble, his daughter says this trip and the recognition is well deserved.

“I want to record everything, precious memories with my dad,” Tillie Ticket said.

For many of these men and women, this is appreciation they never received when they first returned home. Memories and sacrifices made so many decades ago coming full circle through people saying, “thank you.”

Honor Flight trips are completely free for the veterans and paid for by donations.

The group is scheduled to return to Anchorage on Saturday at noon.

The post Alaska veterans set off on Honor Flight appeared first on KTVA 11.