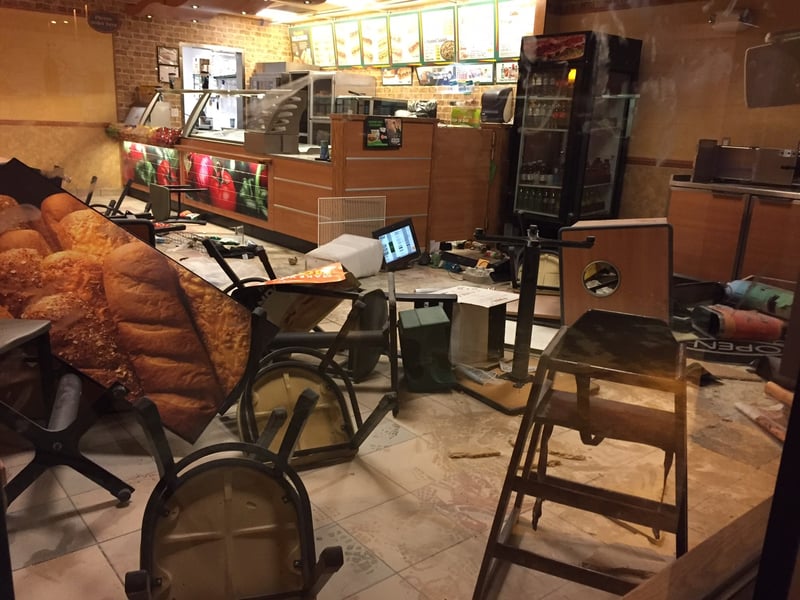 The woman accused of trashing an East Anchorage Subway Tuesday night has been identified as 35-year-old Nikki Abrell, authorities say.

She is charged with third-degree criminal mischief, harassment and resisting arrest, according to Anchorage Police Department spokesperson Anita Shell.

According to charging documents, Abrell was naked, destroying the inside of the Subway restaurant when police arrived. After being taken into custody, she managed to slip out of a handcuff and “threw her arms forward.”

Abrell “appeared to under the influence of drugs” and “could not hold a conversation only murmured her statements,” a responding officer said in a formal complaint.

When asked why police believe she was under the influence of spice, Shell said, “I think it was the behavior more than anything.”

While authorities don’t know for sure what was behind Abrell’s erratic behavior, the Alaska Department of Health and Social Services has been studying the uptick in paramedic calls to see if the drug spice is truly the culprit.

Dr. Michael Cooper said, so far, it seems to be.

“There’s a good proportion of the ones that we’ve reviewed so far that are, in fact, likely or highly likely related to spice,” said Cooper.

He adds long-awaited analysis of spice sold on Anchorage streets is also coming in. A California lab found products that are often 30- to –50 times more potent then marijuana — a hodgepodge of different chemicals and drugs that include cocaine, methamphetamine and ecstasy.

Cooper said, in combination, they can produce extreme results.

“They can give you symptoms like acute psychosis, hallucinations, delusions, true psychotic features,” said Cooper. “It’s a deadly game.”

The building maintenance supervisor told police the damage to the Subway restaurant was estimated at more than $20,000.

Abrell’s bail was set at $10,000. She was arraigned in court on Wednesday.

ANCHORAGE – Police were called to an East Anchorage Subway Tuesday night after a female suspect violently damaged the interior. Police on scene said they believe she was on the drug spice.

The incident was reported at 7:30 p.m. at the Subway located near the intersection of Tudor Road and Patterson Street, according to officials. Employees told police the suspect entered the restaurant and began “acting odd.”

“People described her as ‘a little crazy,'” said police Sgt. Shaun Henry. “She disrobed, went fully nude and kinda just went nuts. Started breaking furniture, destroyed the store, knocked over computers, ripped the ceiling down, sprayed a fire extinguisher all over, locked herself in the bathroom for awhile, broke just about everything you could find.”

An employee said he also found human waste on the floor when he began cleaning up.

Police subdued the female and took her into custody. Once medics arrived on scene, they examined her and told police they believed this was a spice-related issue. They transported her to a nearby hospital for treatment.

Henry says once she recovers, she will most likely face felony charges.

“She did a significant amount of damage and it’s gonna take awhile to fix the store,” Henry said. “It’s a mess.”

The restaurant’s owner arrived at the scene shortly after she was notified of the incident by police.

No one was injured during the incident, according to Henry. He said there were no customers at the time, but multiple employees were working and witnessed the suspect’s behavior.

Henry said the woman’s violent reaction to the drug is not unusual.

“You see all kinds of behavior,” he explained. “Some people just lay down and go to sleep. Other people become extremely hostile or violent. You never know what you’re going to get and that’s part of the danger with it is you don’t know what it’s going to do to the human body and you get sometimes these very extreme reactions.”

He said anyone who sees someone exhibiting unusual behaviors that may be spice related should call 911 and not attempt to speak or interact with the person.

“It’s a problem and I don’t know what the answer is,” he said. “If people are gonna use it, we have to deal with it.”