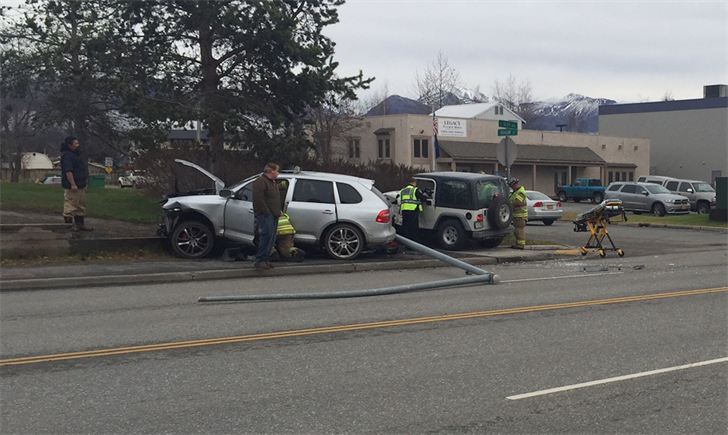 Anchorage police are looking for a driver who walked away from a two-vehicle collision on Bragaw Street Thursday afternoon that knocked down a light pole.

The collision was reported at 3 p.m., involving a white Jeep Wrangler and a silver Porsche, according to Anchorage Police Department spokeswoman Renee Oistad.

Witnesses told police a balding white male, believed to be in his 60s, was driving the silver Porsche, according to APD officer Sean Purcell. The Porsche reportedly cut the Jeep off while heading southbound on Bragaw and the two vehicles collided.

The Porsche driver was not at the scene when police arrived, so it is unclear if he fled the scene or wandered away disoriented, Purcell said. Police have identified him, Oistad said, and are looking for him. She says he will most likely be charged with leaving the scene of a collision and any other charges will depend on what they find during the investigation.

The female driver of the Jeep was injured during the collision and was transported to a nearby hospital. Her condition is unknown.

All northbound lanes of Bragaw Street were closed from the intersection with Northern Lights Boulevard until just after 5 p.m., she said.

Municipal Light and Power personnel were at the scene to remove the downed light pole and make necessary repairs. Oistad says the light pole had to be removed before tow trucks could get to the two vehicles and police could clear the scene.