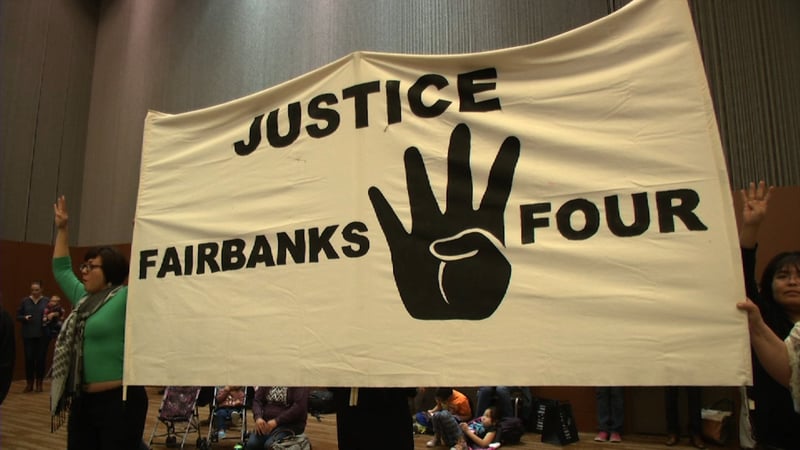 The Fairbanks Four took center stage on the first day of the Alaska Federation of Natives conference in Anchorage.

Gov. Bill Walker addressed the issue briefly in his speech to the hundreds gathered at the Dena’ina Center.

“On the Fairbanks Four, we’re not where we need to be on that,” Walker said. “I’m so impressed with your passion on that. I sense your frustration toward me; I applaud your passion.”

The support for the Fairbanks Four—Marvin Roberts, Eugene Vent, Kevin Pease, and George Frese—was evident as Walker continued speaking. A group raised a banner reading, ‘Justice Fairbanks Four’ and many people held their hands in the air as a protest of the men’s time in prison.

The four men were convicted of murdering John Hartman in Fairbanks in 1997. Many believe they were wrongfully convicted.

“We wanted to make sure the governor heard our message that these young, innocent men need to be released, they need to be free and we wanted him to know all the tribes of Alaska are watching this case closely,” said Victor Joseph, president of the Tanana Chief’s Conference.

“Free the four!” cries could be heard throughout the room as Walker finished his speech.

“With the utmost respect for you, Governor, we ask you to make things right and just. We put our faith, hope, love and trust in your wisdom,” Hoffman said.

“In our Native way, when death suddenly happens we are shocked, we are saddened and we grieve,” Isaac said. “In this case there’s no physical death but the forceful taking away of freedom from four young men.”

Joseph said there’s a bigger issue at stake than just getting the men released.

Walker said he’s impressed by the ongoing support. He said it’s been a central theme at other AFN gatherings he’s attended.

“It’s very appropriate. It’s what’s gotten the Fairbanks Four their day in court,” the governor said. “They’re in court today because of the passion of those behind them.”

It’s an issue that continues to resonate with the Alaska Native community and a fight they hope will result in freedom for the four.