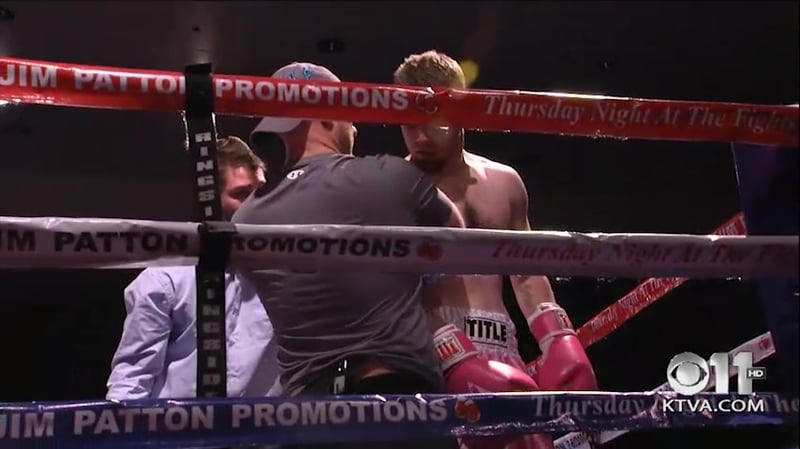 Pink isn’t a color he wears often, but for Bryan Johnson, Thursday night was about trying something new.

“Pink boxing trunks and some gloves, for breast cancer awareness,” he explained as he prepared for his first ever fighting match.

The night kicked off the 27th annual Thursday Night at the Fights series. Johnson was one of several first-time fighters.

“You only live once, so why not try things like this? So [we’ll] see how it goes,” Johnson said.

For a first timer, he wasn’t nervous, saying, “I’m expecting to get hit.”

What were his chances of winning? We asked Jerry Miller, known at the fights as “The Matchmaker.” It’s his job to pair up fighters. He said Johnson’s match would make a good fight, but he wasn’t as confident as Johnson.

“I think I might have gave him a little too tough of a fight tonight, but they both got perfect records, 0 and 0,” Miller said.

With some last minute advice, he stepped into the ring.

Second round—a misstep took him down.

Brian Johnson on the mat after suffering a broken ankle. — Photo by Rick Boots

Paramedics helped him out of the ring and wheeled him away with an apparent broken ankle. Not the ending he’d hoped for, but he did what he came to do—try something new.

He joked with his friends afterward that, at 26, he’s “too old for this!”

But he didn’t leave with nothing; winners got $150, and fighters who didn’t win their match walked away with $50.

The post First-time fighters try their luck in the ring at Thursday Night at the Fights appeared first on KTVA 11.