Westchester Lagoon has a new bridge 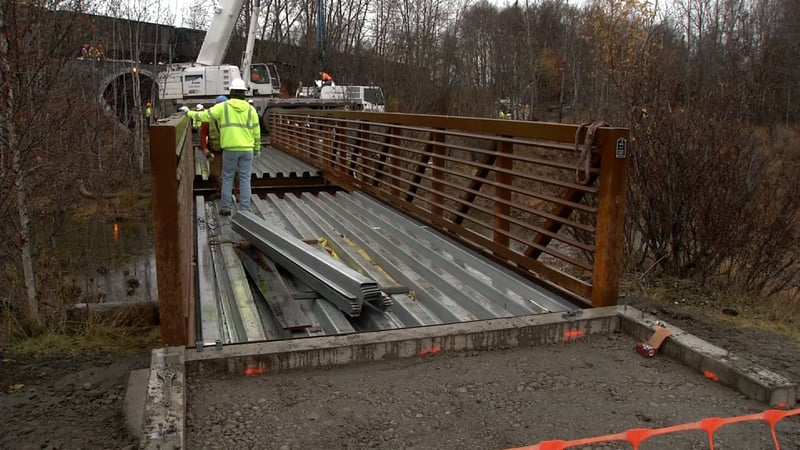 It’s been a year and a half since a bridge on the Tony Knowles Coastal Trail collapsed at Westchester Lagoon in Anchorage. On Friday afternoon, a replacement was finally put in place.

Twenty-seven tons of steel hovered above the ground while a 90-foot crane slowly lowered the structure into place. Two-year-old Luke Gerry had a front row view.

“He loves construction,” said his mother, Arianna Gerry. “So having the bridge come in is very exciting, especially for him.”

The new bridge is sturdy and meant to last, but according to City Parks Director, Josh Durand, that isn’t the case for all the bridges along the Tony Knowles Coastal trail.

“The other bridges are perfectly safe for pedestrian use of the coastal trail,” Durand explained. “But they would be questionable for any type of very heavy equipment going across them like we experienced here.”

Heavy equipment is what sank the Westchester bridge a year and a half ago. A later study showed all five bridges on the trail were in the same shape and needed to be replaced.

Durand said a voter-passed bond in April provided funding to pay for three bridges, including the new one at Westchester Lagoon. But Durand said the new bridge came in under budget, so it’s possible the funding could stretch further.

The two bridges identified now for replacement are at the Fish Creek Bridge and the Sisson Bridge. Durand said those will be replaced next fall.

The post Westchester Lagoon has a new bridge appeared first on KTVA 11.