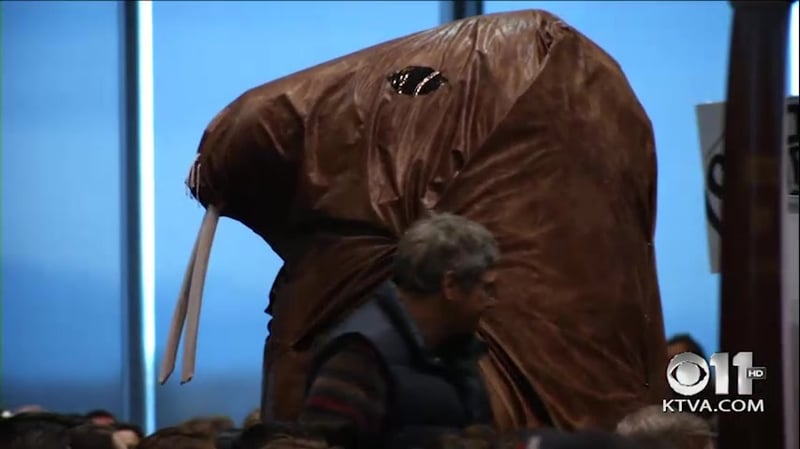 Another day, another demonstration at the Alaska Federation of Natives conference in Anchorage. The first day was about the Fairbanks Four, the second day was dominated by climate change.

As Sen. Lisa Murkowski addressed the crowd, protesters dressed as a walrus, caribou and salmon made their way into the hall.

It was a demonstration by the Resisting Environmental Destruction of Indigenous Lands group. Executive director Faith Gemmill said the protest was meant to draw attention to the senator’s position on climate change while still allowing oil exploration in the Arctic.

“We cannot have these types of developments that threaten our subsistence resources but also contribute to further climate crisis,” Gemmill said, adding it was a “double hit” on the communities because their food sources depend on the land.

The demonstration didn’t last long. Before the activists could draw much attention to themselves, security staff escorted them out, citing safety concerns about the size of their costumes.

“They kicked us out,” said protester Kirby Spangler. “We did manage to walk into the room during her address and get to the front of the room, so we feel like it was a successful action.”

Maybe not that successful. Murkowski said she wasn’t even aware the demonstration had happened until reporters told her about it after her speech.

Protesters said even though it didn’t go as planned they still hope Murkowski takes their message seriously.

Both sides agreed that culture and sustainability are important, but have different ideas about how they’ll be protected.