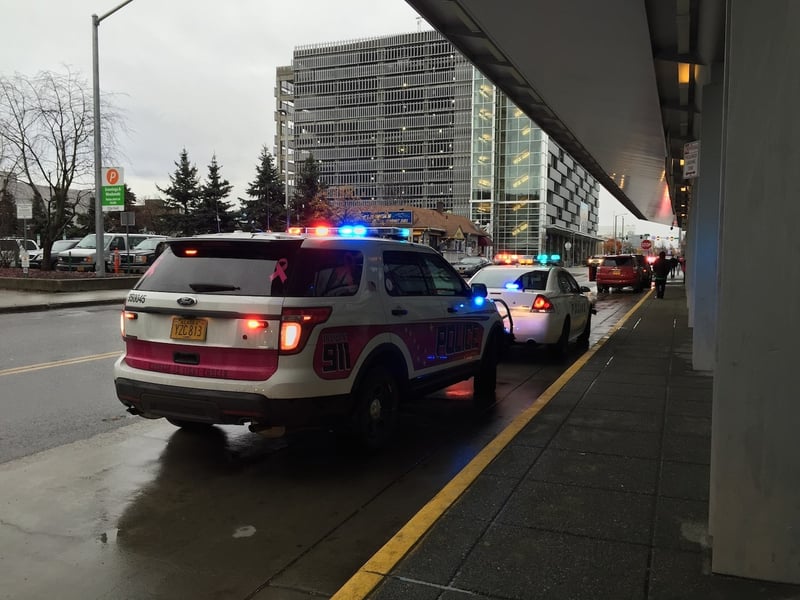 A person died Saturday after jumping from the third floor balcony at the Dena’ina Center, where the annual Alaska Federation of Natives Convention is taking place, police say.

The call came in just after 3:30 p.m., according to Anchorage Police Department spokeswoman Renee Oistad.

Outside and inside the Dena’ina Center, people were visibly shaken as emergency officials responded to the incident.

The death was announced to a packed room on the third floor, where people had gathered to see awards presented. Organizers and attendees paused momentarily for a prayer and a moment of silence. A chaplain was sent to the convention center for emotional support.

People inside the room were asked to stay put as authorities responded. First-floor attendees and others were evacuated.

At the close of the gathering, an Inupiat gospel group sang songs of support and comfort.

The AFN Banquet, scheduled for Saturday evening, has been canceled, a spokesperson for AFN has confirmed.

Anchorage police say the person’s next of kin has been notified.

AFN officials released a statement regarding the incident:

On behalf of the AFN Board of Directors, Co-Chairs, delegates and staff, we offer our deepest condolences to the family of Anthony Choquette, who ended his life at the Dena’ina Center on Saturday near the close of the AFN Convention. We are asking Alaskans to unite in support of Mr. Choquette’s family both in Alaska and out of state, and friends to help them cope with this tragedy.

We are extremely grateful to the Anchorage Police and Fire Departments for their quick and effective response. The APD’s counselors are also much appreciated for helping witnesses and other people cope with the initial shock. We are very grateful to the AFN staff and attendees who were also first responders and helped in difficult times. Our sincere wishes to those who were directly and indirectly impacted.

As we grieve, we are reminded how precious life is and how much we depend on each other to overcome the many challenges facing each of us in life. We must rededicate ourselves to the cause of healing the pain individuals feel, supporting grassroots efforts to overcome addiction, and supporting wellness programs in every community in Alaska.

If someone you know exhibits warning signs of suicide, Alaska has a 24-hour care line: 1-877-266-4357. More information about where to turn for help is available here.