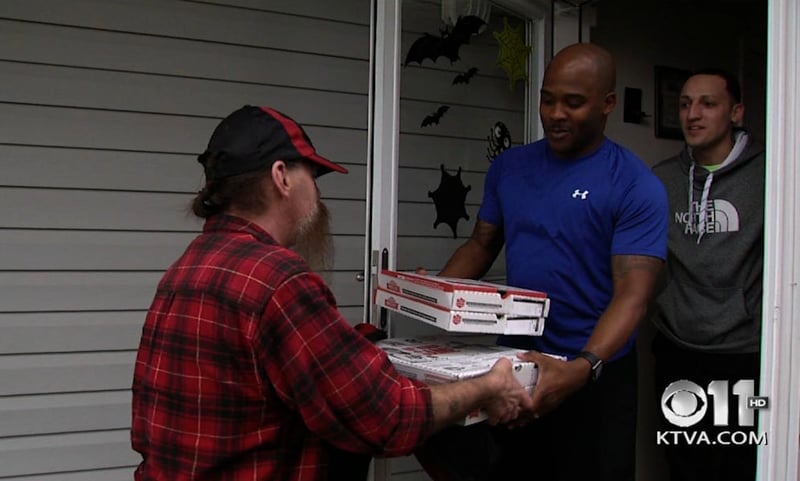 You’ve probably heard the saying “God works in mysterious ways.” One pizza delivery man says he believes it, and his life was changed after he made a special delivery to a local church.

“I have to feed the people of Anchorage, that’s what I do for a living,” said Ken Felber as he made deliveries Sunday afternoon.

You might recognize him — he’s been delivering pizza in Anchorage for 14 years. If he hasn’t delivered to your house, you might have at least seen his famous mustache on TV. He’s won best mustache in Alaska many times at the Miners and Trappers Ball.

“I love to brag about that,” he said.

And if you ask his co-workers about him, they’ll tell you there’s never a dull moment with Felber.

“This guy has the most fascinating life of anybody if you talk to him about his stories,” said a fellow Papa John’s employee.

But Sunday, Felber says he received the surprise of his life.

“I’m shaking so much I don’t want to give someone a soda pop and have them open it,” he said.

It happened when he delivered pizza to the Chugach Covenant Church Congregation.

“That’s the coolest thing that’s ever happened to me,” he said. “I mean, you hear it every now and then, but it actually happened to me.”

In the last few weeks he’s had to spend hundreds of dollars on unexpected repairs for his car, and without health insurance, he’s struggling to fill prescriptions he says he needs.

“Unfortunately, all too often, when you hear about the church, right now, it’s about what the church is against. And it’s like, we kind of lose sight that there’s a lot of people who really love our community and want to do whatever they can to help people out and this is just an opportunity for us to do something really small but really have a big impact on somebody’s life,” Krause said.

Felber now has a new tip record and new faith.

“The Lord does work in mysterious ways. Think about that. I’ve never believed that, but now I do,” he said.

Felber said he wants to spend the money practically. He needs snow tires, and he has some medical expenses. He said he didn’t have plans to splurge, but he and his wife would celebrate with a good spaghetti dinner.