JBER brigade trains for the future as Army cuts loom 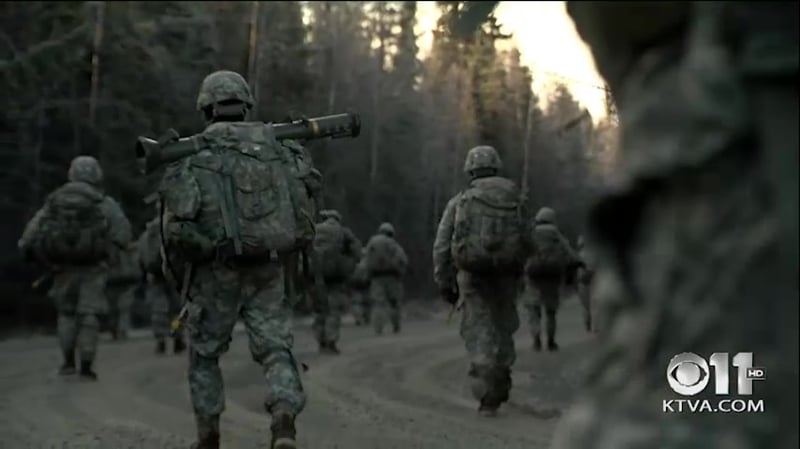 The possibility of losing more than half of their members to U.S. Army downsizing isn’t stopping the soldiers of the Fourth Brigade Combat Team (Airborne), 25th Infantry Division (4/25) from preparing for future missions.

The brigade is working through one of its largest training exercises ever, all while preparing for the reality of the cuts. A 2,000-member force is taking part in the exercise, called Spartan Fusion.

The soldiers parachuted onto an airstrip, established a central command and pushed out, creating a safe zone just like they would in a real world operation.

“The more we can expand that bubble of safety around this area, the less likely it is the enemy can attack it, either with indirect fire or with their troops,” said 1st Lt. Sulev Sepp.

Col. Scott Green, commander of the 4/25, said this was more than just good training for the brigade. They’re also testing out an airborne taskforce; the size of the brigade will be reduced to after cuts go through.

The cuts aren’t expected to be complete until the end of 2017 so in the mean time, the soldiers of the 4/25 are training at full strength.

“There’s just a lot going on in the world that the brigade needs to be ready for,” Green said. “We’re still a brigade combat team and there aren’t very many in the Army and so everybody has got to be as ready as they can be.”

The cuts to the Army in Alaska, announced in July, are currently under review. But local Army leaders say they are moving ahead with planning for the cuts, which will reduce the number of soldiers in Alaska by about 2,700.

Spartan Fusion will continue for another 10 days as the soldiers prepare to take what they’ve learned here down to the Joint Readiness Training Center in Fort Polk, La. in February.

The post JBER brigade trains for the future as Army cuts loom appeared first on KTVA 11.