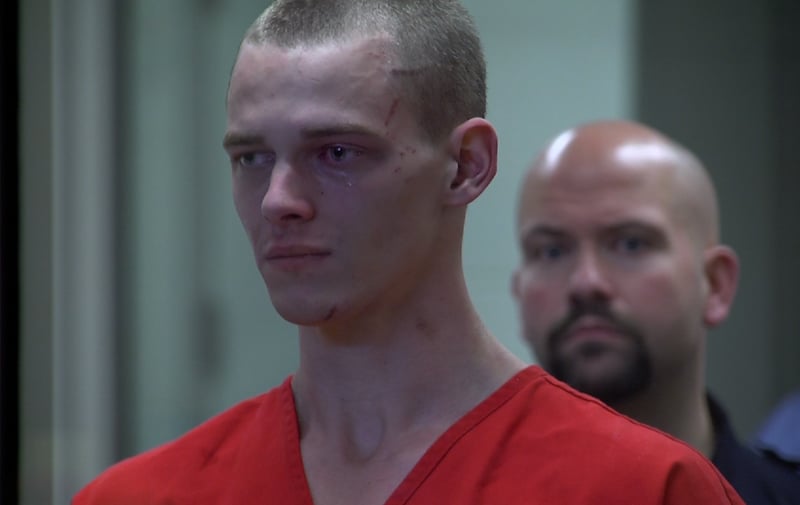 ANCHORAGE — A large portion of Mountain View was shut down while Anchorage police searched for a suspect, identified as Christian Beier, wanted in connection with Friday’s downtown shooting.

The search spanned for hours on Saturday in the neighborhood. Just before 1 p.m., APD says 21-year-old Beier was taken into custody. He was arraigned Sunday on charges related to Friday incident.

In a release, the Anchorage Police Department chronicled the events, beginning on Friday evening just after 7 p.m.

Police responded to the area of W. Fifth Avenue and N Street after a citizen “saw a woman walking down the street who looked disheveled and seemed to be injured.”

When authorities responded, they learned the woman — who suffered a gunshot wound to the head — was the victim of a shooting and that there may be more victims inside the house, located on the 500 block of N Street. The woman was taken to the hospital, police say.

When officers arrived at the house, a 17-year-old male appeared at the door and then collapsed. Police discovered he had multiple gunshots to both his upper torso and his head. He was also taken to the hospital, APD says, adding no other people were found inside the house that night.

Early Saturday morning, an arrest warrant was obtained for Beier. During the course of events, APD spokesperson Renee Oistad says police were alerted to a Facebook page with the same name as the suspect.

“That’s what happens to people that f*ck around with the girl I’m with behind my back. They catch bullets,” one post from the account reads. “I’m a wanted fugitive and felon now. Oh well! If they want me come an get me.”

A link to an article related to the shooting was also posted to the account, with the comment “I don’t f*ck around b*tch.”

At around 8 a.m., as APD SWAT was headed to the Valley — where Beier was believed to be — Alaska State Troopers announced they were following Beier inbound on the Glenn Highway.

“Beier abandoned his vehicle in Mountain View near Lion’s Park and ran into the woods with at least one firearm,” a release from APD states, adding that authorities formed a perimeter around the area.

Beier was taken into custody after being bitten by an APD K-9. He was then evaluated by medics and taken to APD headquarters for questioning.

Police say it appears that the suspect and both victims knew one another and this was not a random crime.

At Sunday’s arraignment, the judge entered a not guilty plea for Beier.

Neighbor Patricia Wells, who grew up on N Street and owns a home there, said, “It’s just a really friendly safe neighborhood, people walk their dogs, kids in strollers, so it was really a big shock when I heard there was a shooting on N Street.”

Two people have been transported to a nearby hospital for treatment of gunshot wounds following a shooting in downtown Anchorage Friday night.

The severity of the victims’ wounds were not immediately available, police said.

The incident was reported at 7:11 p.m. near the intersection of N Street and Fifth Avenue. More than a dozen units initially responded, including at least two K-9 units.

Police have taped off a home on N Street near Sixth Avenue and were seen entering and exiting.