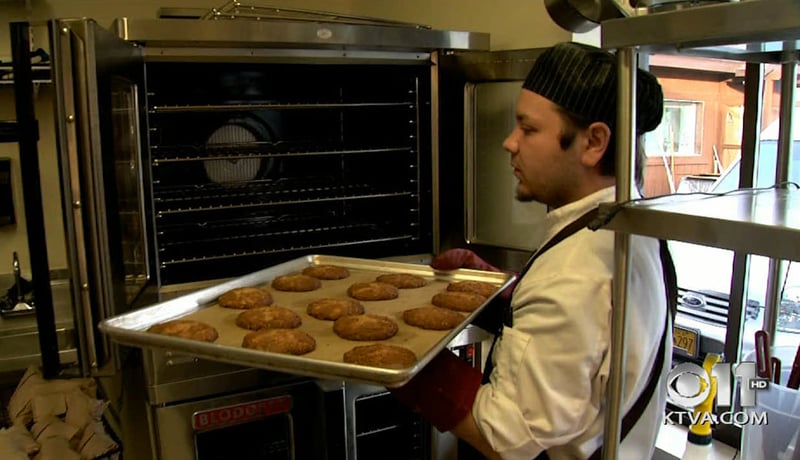 They hoped to find a location similar to the original: A commercial storefront integrated into an otherwise residential neighborhood. Fleishman said finding such a place was a challenge in strip mall-laden Anchorage.

They found the perfect spot in an old beauty parlor at the corner of Logan Street and 16th Avenue in the Airport Heights neighborhood.

“We basically took it down to the cinder block and rebuilt it,” Fleischman said.

The space is small, if not downright cramped, but the Fire Island staff make it work. Everything is baked on-site, except for the bread, which is delivered from the nearby original location.

“I think I was a submarine designer in a prior life,” joked Fleischman, referring to the close quarters.

The location officially opened its doors on Oct. 1. Owners decided not to make a big announcement or do any advertising. Instead, they chose to slowly integrate themselves into their new community.

“We were able to open quietly … and keep the batches small,” said Fleischman.

In doing so they’ve gained a new clientele, many of whom walk to the bakery as part of their weekend ritual.

“It’s nice to have a little local neighborhood bakery,” said Airport Heights resident Erin Vanderlugt. “People like their jobs and you can feel their happiness while you’re sitting there enjoying your treat,” she added.

Fleischman said a proper small business provides more than just a service or product for its customers; it acts instead as an anchor for the neighborhood – a meeting place where people can feel at home.

“People want to be recognized. They want their first name to be used,” said Fleischman. “We really value that connection.”