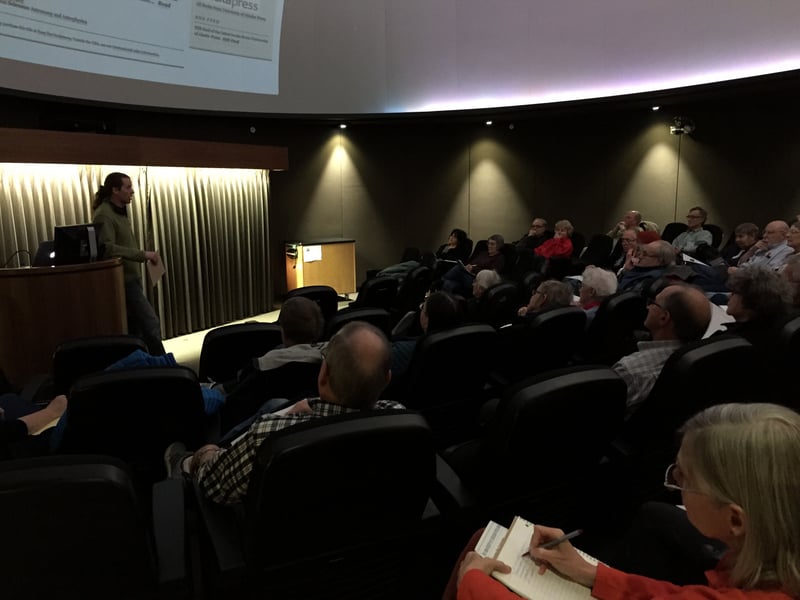 If you walked into the Lucy Cuddy Hall on the University of Alaska Anchorage campus this past Friday around noon, it wasn’t backpack-wearing, smartphone-holding students in their 20s you would have seen.

Instead, people in their 50s and older — some carrying sack lunches — meandered around the dining area. The open space buzzed with friendly chatter. Several people had just gotten out of a class about the Scientific Revolution and were grabbing a quick bite to eat.

These non-traditional students are taking classes through nonprofit OLÉ! (Opportunities for Lifelong Education). Started in 2007, membership has grown over the years from roughly 50 people to around 350.

OLÉ! — a volunteer-run organization — is designed for people 50 and older, but anyone is welcome to join, members say. It’s not common, however, to see many millennials taking the courses.

To be part of OLÉ!, you pay $150 a year and can take as many courses as you want — class space permitting. There are no tests and no grades.

The course offerings are diverse. For this year’s fall term, you could learn about everything from managing photographs on your personal computer to lost villages of the Aleutians to astrobiology.

In Friday afternoon’s astrobiology class in the UAA Integrated Sciences Planetarium, some OLÉ! members sat back in their chairs, seemingly transfixed, as professor Dr. Travis Rector explained the nuances of the Drake equation — a complex formula that calculates how many civilizations might be in the galaxy. Others — like Dave Sears — diligently took notes, their heads bobbing up and down as their eyes darted from Rector’s slides on the planetarium’s dome screen to their notepads.

“You stop learning, you stop living,” said Sears of why he feels motivated to take classes that aren’t tied to a career. “There’s so much out there to know.”

The astrobiology class had a high participation rate. When Rector posed a question, people answered. And OLÉ! members had plenty of pointed questions for the professor, too.

Rector and the other OLÉ! teachers aren’t paid, which was a decision made early on, says Gretchen Bersch, president of the OLÉ! board.

“How much do you pay somebody who is a real expert? You could never afford to pay them a lot,” said Bersch, who teaches an annual class that highlights women who are part of the Alaska Women’s Hall of Fame.

Instead, people like Rector and Bersch head OLÉ! classes for the love of teaching. Many return to teach, such as Wayne Mergler — a retired high school English teacher who has educated OLÉ! members for years.

And because there aren’t a slew of paid positions with OLÉ! — creating an expectation that certain people will do all the work — members come together to sustain the nonprofit, Bersch says.

Looking ahead, Bersch says she wants to increase the diversity among OLÉ! members to better serve the community. In the astrobiology class, most of the attendees appeared to be white.

At a table in the Lucy Cuddy Hall Friday, there was chatter about potential future classes and past favorites.

Gretchen Hazen was among those eating in the dining area after the mid-morning class on the Scientific Revolution. When she retired, she says, signing up for OLÉ! was one of the first things she did.

Her main complaint of OLÉ!: “There’s isn’t enough time to take all the classes!” she said jokingly.