FRANKLYWNOW - Healing from within: Anchorage parents approve of child chiropra

Healing from within: Anchorage parents approve of child chiropractic care 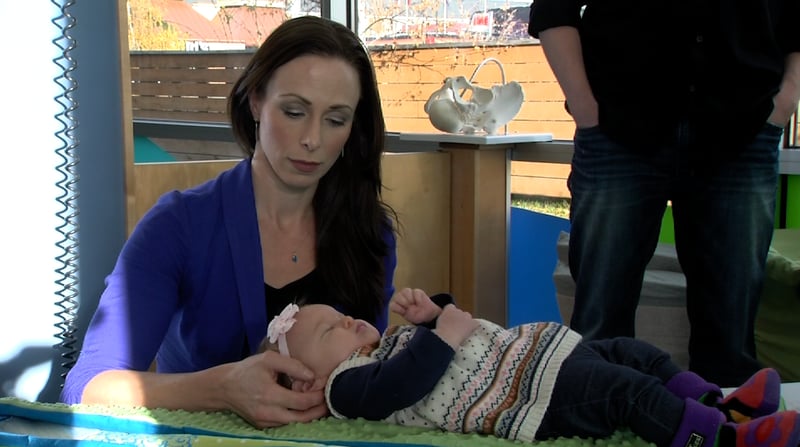 As a parent, Mindy Seay says her keeping her kids healthy is one of her biggest priorities.

About two years ago, Seay’s oldest son, Israel, began having recurring issues with allergies and asthma.

“We were trying all kinds of different things,” the mother of three said. “And just not seeing very good results.”

Dr. Jessica Dachowski owns Whole Family Chiropractic with her husband, Ryan. The chiropractic duo has been at their midtown Anchorage location for four years, and Dachowski says in that time, she’s seen more and more parents bring their kids into her office.

Dachowski says her patients are surprised to learn how many infirmities are actually connected to the spine — vision problems, skin conditions, poor concentration and bronchitis, among many others.

In Israel’s case, his spine wasn’t communicating properly with his lungs. Sometimes, all it takes is a little adjustment to correct that miscommunication, Dachowski said.

“We allow the brain, the spinal cord and all those messages to flow uninterrupted — or, as much as possible,” the doctor said.

Another patient, Destinee McClung, says she turned to Dachowski for help after her oldest son, Patrick, was suffering from multiple ear infections on a monthly basis.

“We couldn’t give him antibiotics because he was allergic,” McClung recalled. “So we were giving him medicine to numb his ears, but that was all we could really do.”

She says a little adjustment made all the difference, and years later, Patrick hasn’t had an ear infection since.

McClung also brought her youngest son into Dachowski’s office as soon as he was born, at just 14 hours old. Charlie was born with the umbilical cord wrapped around his neck twice.

“That’s something you don’t even realize, the trauma that can happen right away,” McClung said. “Every baby that’s born, they’re kind of shoved in there, and then they’re born and their neck is getting pulled.”

Seay has adopted the motto of “healing from within.” She considers Dachowski as just another member of her kids’ medical team.

“I’ve seen it in my own children. I’ve seen them have success with chiropractic care,” Seay said. “And I’ve seen their bodies be stronger because of it.”

Dachowski says her mission is to make sure parents leave her office understanding the way multiple aspects of their children’s health are affected by their spinal health.

The post Healing from within: Anchorage parents approve of child chiropractic care appeared first on KTVA 11.