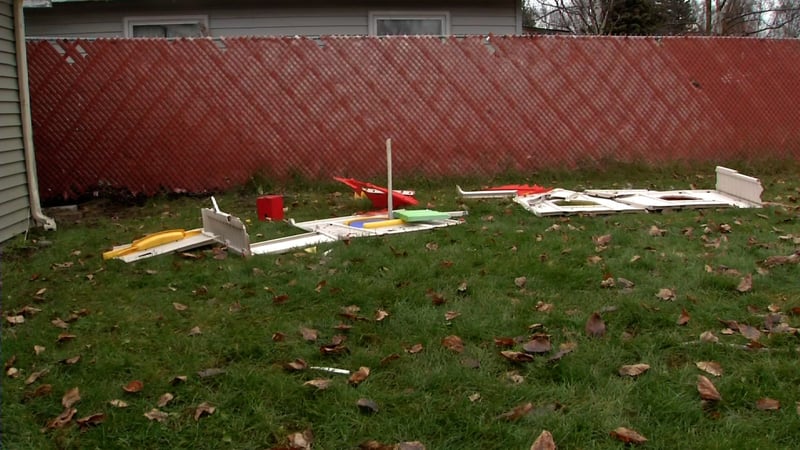 The Dufort family called police just after 4 a.m., according to police spokeswoman Anita Shell. The moose’s antlers had gotten wrapped up in a swing set in the family’s yard and in its attempt to free itself had destroyed a playhouse and damaged their Airport Heights home.

“We were all sleeping in the bedroom and I could hear the moose’s footsteps,” explained Kelly Dufort, whose bedroom was on the other side of the wall from the moose. “Then a couple minutes later I heard just screeching metal just chasing across the deck and then just like these heavy, heavy bangs and it just felt like an earthquake, like the whole house was shaking.”

Dufort and her husband gathered their two children and hurried them into the living room, away from the pounding on the house.

“We called 911, and this guy was just rummaging around and you could hear him pounding against the wall, and …I thought there was going to be a hoof just coming through the house,” Dufort recalled. “And he screeched across the screen, like he tore the screen up with the swing set.”

Dufort said the two officers who responded were “ingenious” in their solution to the moose’s plight.

“The officers were kind of amazing, because they… were armed with nothing but a broomstick and some duct tape and a nice police knife,” she laughed. “They were trying to cut the ropes loose and they did, and as soon as they cut it loose, he just went wildly bucking just all throughout the yard, and he was free and I think he was happy.”

The moose knocked some of the house’s siding loose and dented a gutter drain, but the majority of the damage was done to Dufort’s daughter’s playhouse, which lay in pieces throughout the yard.

“Margo picked up my husband’s tool box, and she said, ‘Daddy, can you fix my playhouse?’ and he said, ‘Yeah, we’ll take a look at it, but Margo, I think you might be in the market for another playhouse,'” Dufort said.

Anchorage police shared a video of the incident, along with a statement about the dangers of approaching a trapped animal.

“Saving lives and getting residents to safety is one of the many job responsibilities of an officer and last night this responsibility extended to freeing a moose tangled in a swing set. We would never encourage residents to try this on their own and should call us for help in a situation like this. The officer was able to use a broomstick handle to loosen the rope and keep some distance. Luckily we were able to free the moose and no one was injured. Whew!”

Shell said neither the humans involved nor the moose were injured during the incident.