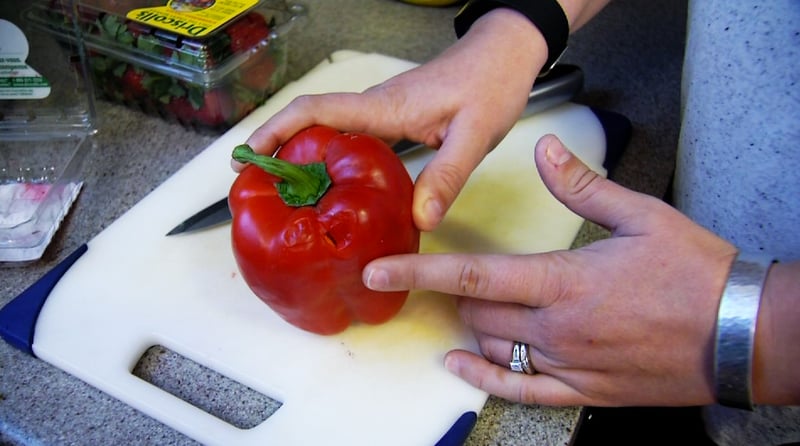 Kelly Kilheffer says it’s happened to her too many times to count — a trip to the grocery store for fresh produce ending in almost immediate tragedy for the goods brought home.

“If you want it to last about seven days, you gotta find stuff that’s not bruised,” she said of the produce-shopping process. “And any ones that are, you’re going to want to get rid of right away or else they’ll ruin the whole thing.”

A whopping 95 percent of Alaska’s food is imported, says Danny Consenstein with the Alaska Farm Service Agency, with the other percentage coming from subsistence practices and personal use. And it’s a long ride to the Last Frontier for fruit and veggies to arrive at local grocery stores, which decreases the shelf life.

“In the United States, 40 percent of the food we have is wasted,” Consenstein says. “The typical American leaves $1,500 worth of food on their plates every year.”

The U.S. Department of Agriculture has set a goal to reduce half the food waste nationwide by the year 2030. Consenstein’s own personal movement starts in his backyard garden, where carrots, kale, lettuce and other produce are in full supply.

“We only usually pick what we need,” Consenstein said. “If I’m going to have a salad during the summer, I just come out to the garden and I pick some lettuce and go out and make the salad.”

Kilheffer, who has a husband and three tots to feed, relies on visits to Costco and other local grocers for food. She says she regularly consults her fellow moms for tips and tricks on how to extend the shelf life of her produce.

“I keep all of the tops of all my veggies,” she explained, showing a tupperware container of bruised pepper tops, broccoli stems and other discarded produce. “About once every other week, I’ll put it in my Crock-Pot … and then it becomes a nice vegetable broth that’s homemade.”

Kilheffer says wasting as little as possible makes her feel as if she’s getting her money’s worth out of what her family is eating. More time preparing food (like rinsing berries in white vinegar water so they’ll last longer), is worth the time. And, she says, it’s also worth it to spend a little more time in the produce section, giving an enlightening trip to Fred Meyer to illustrate.

“The produce guy actually said, ‘Well, first off, you can taste anything here … that’s your prerogative, you’re buying the produce,'” Kilheffer recalled. “And he said, ‘Secondly, you should stand here and go through all of these and pick the one that you want … we want you to get the best produce.'”

She says now she’s the “crazy lady” picking through all the selections at Fred Meyer. But she’d rather spend less time throwing away what could be tomorrow’s lunch.

With Alaskans spending about $2 billion on food every year, Consenstein says it’s time to take advantage of Alaskan soil.

“Almost most of that [money] is leaving Alaska and going down to the Lower 48,” he said. “And I think we have some real opportunities here to produce more of our own food and keep some of those dollars here in Alaska.”

Kilheffer says she’d definitely be willing to pay more for produce and other food grown/raised right here at home.

Constenstein says she’s in luck — the demand for Alaska-grown produce is strong. Alaska has one of the highest percentages of food sold at farmers markets, he says, citing the frequently packed South Anchorage Farmers Market as an example. The hope is that the supply of local food will meet that demand.

“I think that’s a really good trend here,” Consenstein said. “But we have a long way to go to do a better job feeding Alaskans.”

Below are tips and tricks, courtesy of Kilheffer, to keep produce fresh longer: