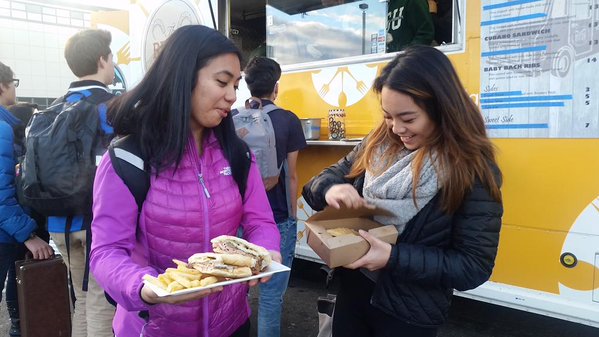 Lunch hour is among the busiest times of day in the restaurant business. Thursday, the Rustic Goat restaurant parked a food truck at West High School and students got a break from the typical cafeteria food.

She’s impressed because the chefs who cooked the food are her classmates. They’re members of the school’s Prostart team, which is a program developed by the National Restaurant Association to promote school-to-career learning.

“It takes us all working as a team and everybody knowing what their job is,” Steel said.

The teens created a menu which included barbecue ribs, buffalo hot wings and a cubano sandwich. They cooked the food inside the truck and got a taste of what it’s like to work in a restaurant kitchen.

“It’s sort of a forgotten craft and there’s not a lot of people coming out of high school that want to be a chef,” Marcum explained. “To get these kids inspired now is a big deal for me.”

All the money made at the food truck this week will help the team prepare for a statewide cooking competition.

“Whoever wins the competition goes to the Lower 48 to compete nationally,” Steel said.

This West High team has never placed in Alaska, but judging by the popularity of their food, this might be their year.

Video will be added to this story following the Evening News