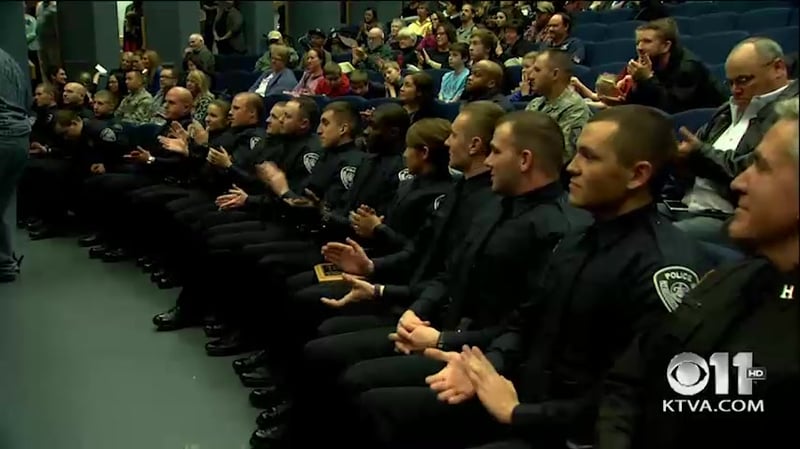 The 19 newest officers to complete the Anchorage Police Department’s training will be joining the force during a challenging era. APD currently staffs about 340 officers, but Mayor Ethan Berkowitz wants that figure to be closer to 400.

“When you have inadequate levels of policing, it’s not surprising that homicide rates increase,” Berkowitz answered when asked about this year’s spike in violent crime.

He said 2015’s police academies are the first in several years.

“We’re playing catch-up for some decisions that were made in the past. Once we catch up, we’ll be in a safer position,” he said.

The mayor has requested APD hold three police academies in 2016 – one more than the two originally planned.

“If we have a larger police presence … we’re going to have a safer community,” he said.

The shortfall in officers has led to certain units being understaffed or – in the case of the intelligence division – cut entirely. It’s also prevented many officers from doing preventative police work like community outreach programs.

Many officers share the mayor’s sentiment of boosting the number of cops on the street.

“The mere fact that they’re willing to go that direction is good,” said Sgt. Gerard Asselin, president of the APD Employees Association.

He said between the fresh mayoral administration and new Chief of Police Chris Tolley, the department is on the right track.

“We certainly see a need to increase police staffing and fortunately, this administration has taken that same feeling,” Asselin said.