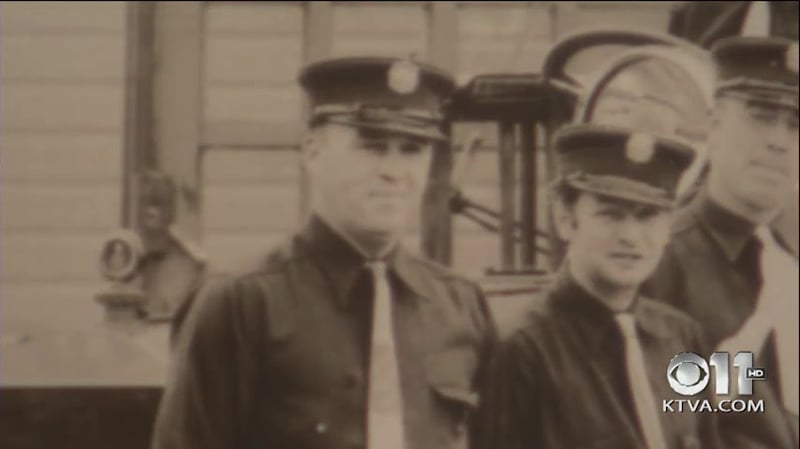 It’s an honor that some say is long overdue, but one of Anchorage’s earliest fire chiefs finally has a headstone to mark his grave.

For more than 70 years, Fire Chief Tom Bevers rested in an unmarked grave in the downtown Anchorage Memorial Park Cemetery. On Thursday, members of the Anchorage Fire Department unveiled the headstone that had been paid for with public donations and help from Mat-Su Memorial Services.

Bevers arrived in Anchorage from Virginia in the early 1920s and quickly became the city’s first paid firefighter, according to Audrey Kelly with the Cook Inlet Historical Society. A few years later he was named the chief.

“He did become chief in 1927 and served to 1940, and in the meantime he was involved with real-estate and business dealings and development,” said Kelly.

Assistant Fire Chief Jim Vignola said Bevers was known as a ladies man, as well as a colorful character. He told a story about a time when Bevers was ordered to attend a city council meeting.

“He didn’t want to go,” Vignola said. “But because he was ordered, he went like a good soldier. But he brought with him some powdered tear gas and I guess he smoked cigars, so he put this powdered tear gas in his ashtray and when he touched it with his cigar, it cleared the council out and the meeting was over, so he didn’t have to attend.”

Tom Bevers was well known in Anchorage in the 1920s and ’30s, but Kelly said there was one thing no one knew until the day he died in 1944.

“He had a very big secret,” Kelly said. “He had passed as white all of his years in Alaska. And, in fact, the community didn’t learn until his sister came up to take care of his last effects and pick up his body and take it back for burial in Virginia, that the community realized that they were African American.”

Kelly said the sister left Bever’s body behind to be buried in the city where he’d thrived. How it ended up in an unmarked grave is still a mystery. Seventy-two years later, many say he finally has the recognition he deserves.

The post Early Anchorage fire chief gets a headstone after more than 70 years appeared first on KTVA 11.