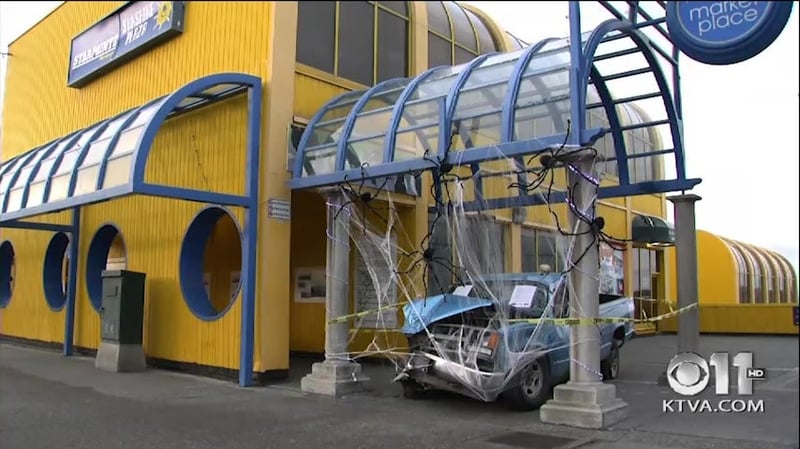 With Halloween just around the corner, decorations are up, including in downtown Anchorage. But one business’s display is actually a warning for Alaskans.

The work of preparing for Halloween is never done for Jim Ramsdell, general manager of Playhouse Bar. He’s constantly adding more to his masterpiece on Fourth Avenue: a smashed, beat up pickup truck decorated in cobwebs, spiders and talking skeletons.

“I think it’s the scare, you know? Being able to scare somebody but then they realize, ‘Oh it’s not the end of the world,’ I just scared you a little,” Ramsdell said.

He hopes the truck leaves a mark and makes people think as they celebrate this weekend.

“This is what can happen to you if you go home and you’re gonna drink and drive, this is what could happen,” he said.

The reality of drunk driving is what the parents of two 15-year-old girls killed by a drunk driver in 2013 wake up to every day.

“We’re going on two years of dealing with some body’s decision not to have a plan,” said Gary McPheters, the father of Brooke McPheters.

In August of 2013, police say a driver with a blood alcohol concentration more than three times the legal limit hit Brooke McPheters and her friend, Jordyn Durr. They were walking home from shopping.

“You can’t take it back,” said Brooke’s mother, Shanna McPheters.

The McPheters just happened to be in Anchorage this week. They no longer live in Alaska. The heartache here is too much.

“It was so hard to deal with that we are chasing the sunshine and looking for happiness someplace else,” Brooke’s father said.

But they join Jordyn Durr’s mother with a message for Alaskans for this weekend, and every day.

A skeleton chanting drunk driving PSAs and a smoke machine might seem like a bit much to drive that message home, but Ramsdell hopes it’s spooky enough that people will approach the weekend of costumes and candy with caution.

The cause of the accident that damaged the truck is unknown, but impaired driving is the number one cause of accidents.

Anchorage Towing is the company that brought the truck downtown for Playhouse Bar. They’ll give you and your car a ride home if you call them.

Anchorage police say on Friday and Saturday nights, there will be six extra DUI patrol officers out from 11 p.m. to 6 a.m.