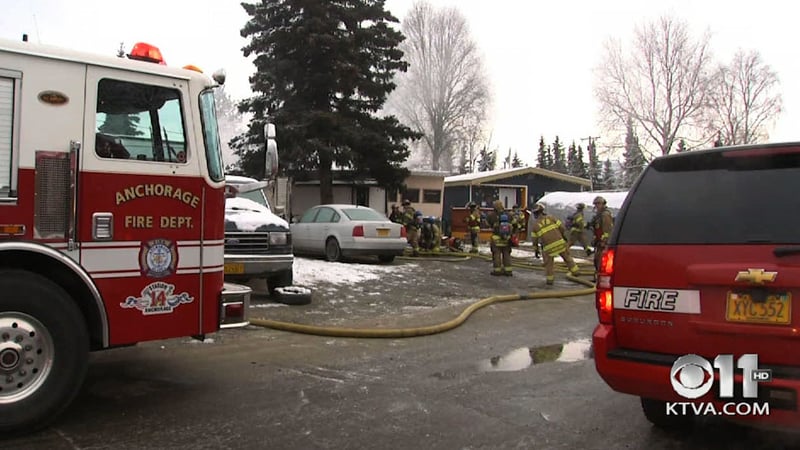 An Anchorage trailer home was destroyed by fire Sunday morning, but the people inside made it out alive thanks to their neighbors’ quick actions.

Raul Alderson was a firefighter for 12 years, so when his wife, Kendra Dicks, saw the shed behind her neighbors’ home was on fire, she called Alderson to help.

“I’m pounding on the door, and she’s like, ‘What? what?’ I’m like, ‘Your house is on fire!'” said Alderson, describing the conversation with his neighbor. “So she opened the door and I know they have like two or three kids, so I was like, ‘Where are the kids?’ And she said they were at a friend’s house, but then she said, ‘I can’t find my husband,’ so we’re running around all the back rooms looking for her husband, then I heard ‘whoosh’ and the shed went up. It was on the walls, we couldn’t find her husband, then we found him! He was on the floor, next to the bed with blankets on top of him.”

Alderson says he was able to get them both out seconds before the back half of the trailer was engulfed in flames. Anchorage Fire Department firefighters at the scene said his quick action — at a time when seconds count — may have saved his neighbors’ lives.

“The window he was under was in flames like a minute after we got out of there — it was movin’ quick,” Alderson said.

“They were very grateful, you know,” Dicks said. She said the displaced family is staying with relatives.

AFD says the fire started in the shed, where they kept some chickens with heat lamps. They believe the heat lamps are what caught on fire, and the flames quickly spread to the home. They also said the smoke detectors in the home had been disabled.