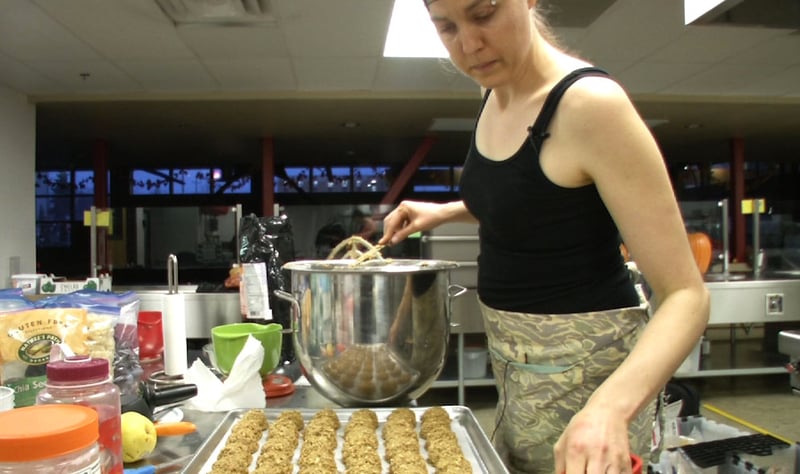 When you have to eat every couple hours, you probably want what you’re chewing on to taste good while also providing proper sustenance.

That thinking was the motivation behind Kat Hubble’s cookie-shaped creation — Kat’s Epic Trail Bites. Packaged and sold at coffee shops and other venues around Anchorage, Hubble’s performance snack is designed to be both tasty and healthy. The chewy, protein-packed, gluten-free treats are sweetened with fruit and come in a variety of flavors.

“It could taste like you’re eating dessert if you don’t know it’s healthy,” the 32-year-old said.

Hubble’s journey to becoming a small business woman started when she was a child living in Georgia. Undiagnosed low blood sugar often left her hungry.

“My prevailing childhood memory is actually being hungry,” said Hubble, sitting in an Anchorage coffee shop on an October afternoon.

When she was in her teens she moved to Anchorage and eventually discovered that having low blood sugar meant she needed to eat frequently — and eat the right kinds of foods — to avoid fatigue.

“When I was 17 I started noticing the correlation and I started getting really motivated to experiment,” said Hubble, describing how junk food made her feel sick while healthier options were more satisfying.

A version of Hubble’s Trail Bites was developed, but the treats were more for herself than others. The portable cookies served as an on-the-job snack that could tide her over until she got home to her fridge.

Then, one day, she was at a coffee shop and chatting with her favorite barista. She recalled him complaining about how tired he was and how coffee wasn’t cutting it.

For Hubble, that was a pivotal moment.

“That was my point of realizing I had a marketable product,” said the self-taught baker.

Armed with validation she was on to something, Hubble got a business license, found a certified kitchen in Palmer to work out of and starting selling Kat’s Epic Trail Bites in 2013.

Things weren’t always easy in the early days of her business, Hubble said. Money from her day job as a music minister went toward keeping her fledgling business afloat.

Hubble’s performance snack business has since become a full-time endeavor. These days, she bakes at the Downtown Soup Kitchen in Anchorage.

Sunday evening, Hubble darted around the soup kitchen, pulling cookies from the oven while prepping the next batch. Nearby, her assistant Marivic Rowland sliced fruit.

Carrot cake and chunky monkey — a mix of chocolate, bananas and walnuts — are some of her most popular cookies, but Hubble is always looking to experiment with new flavors. Sunday she baked gingerbread cookies — made with the holidays in mind, she said.

For Hubble, the goal is to keep sharing her Trail Bites with whomever she can.

“I think this product could benefit people,” she said. “I have, personally, the biggest heart for … busy people who are hungry all the time, don’t have enough time to prepare a good, healthy meal.”